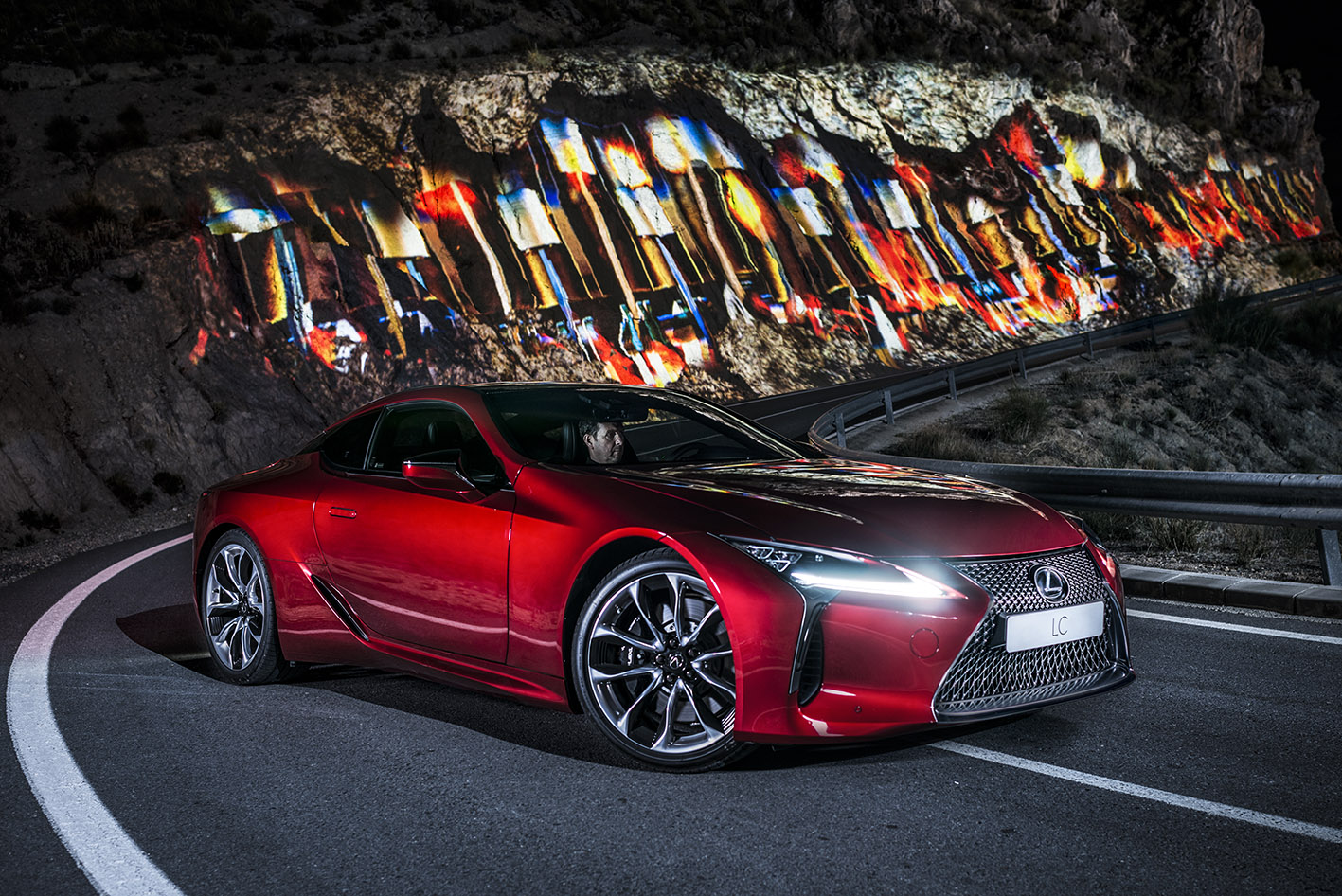 A new Lexus LC 500 accelerates on a twisting mountain road and as it passes, its thrilling engine note shatters the rock face to reveal a battery of pounding pistons and spinning gears. In another scene, a face in the mountain turns to watch the car speed by.

This amazing spectacle heralds the arrival of Lexus’s flagship coupe, the result of a ground-breaking film-making project that has shunned CGI trickery in favour of real-world projection mapping artistry on an unprecedented scale. Its aim? To give viewers an immersive visual and aural introduction to the LC, before they actually experience the car in the metal.

Behind the scenes of Into the Light

As the sun rose over the dusty peaks of the mountains surrounding Canjáyar, the sound which filtered through the trees was not the subtle singing of songbirds. Instead, the powerful roar of the Lexus LC 500’s 467bhp V8 engine reverberated off the mountains and echoed through the valleys below.

This was the first day of a groundbreaking film shoot, featuring the new Lexus LC 500. The crew were up early to begin setting up the first location ready for filming, the bulk of which was to be completed under cover of darkness.

The video below goes behind the scenes of the shoot to show how this ground-breaking film was made.

Most of the crew had never seen the car in the metal before and were impressed by the luxurious beauty of the car and the colour of the paintwork, which presented a stark contrast to the barren and landscape which surrounded it. The depth of the paintwork meant the colour sparkled in the sunlight, presenting a different shade of red from whichever angle it was viewed.

The location was chosen by Lexus as it has been used for previous film shoots – but there was a key difference with this one: the stunning projections onto the side of the mountains had, to our knowledge, never been attempted before. In order to properly map the locations used, a skeleton crew completed a recreational visit prior to the shoot. During this time Edgar Davey, the motion designer on the shoot, took lots of photographs to ensure his designs would fit the landscape. The final designs were kept simple to accentuate the design and styling of the car – these took two days to finalise.

When darkness fell, the projection mapping began in earnest. Due to the scenery and rock faces used in the projection, there was an element of improvisation as there were only so many scenarios which could not be predicted before the crew arrived on location. A team from projection mapping experts QED Productions, led by Paul Whigfield, had to map the projections onto the rock, linking multiple projectors to create a seamless image  This complex process involved projecting both cats and raccoons onto the rock, to much laughter from the crew.

As well as the projections, the team also needed to capture the sound of the LC 500. Toby, the sound engineer on the shoot, was so focused on capturing the sound authentically that he even dreamed about the setup he would use the night before the event. The background noise from the projectors and generators meant that the sound capture had to be completed separately to the filming itself.

Once the projectors had been mapped and aligned to the mountain, it was time for the car to speed past them. The crew held their collective breath but, as Edgar correctly summed up, “it happened like magic.”