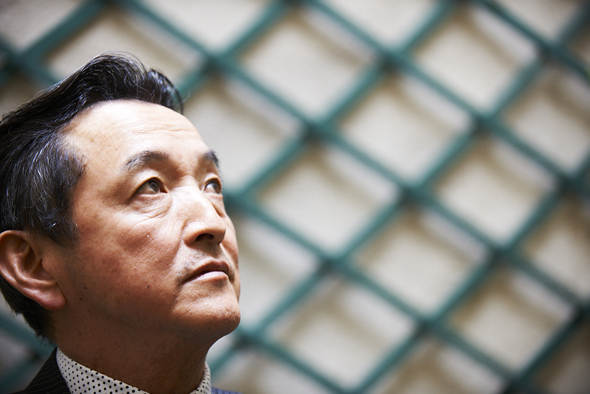 See also:
Inside the Lexus Design Center
Lexus LF-NX: Designed to Stand Out

At an exclusive preview of Lexus’s exciting new NX compact crossover SUV at the Milan Design Week, newly installed Lexus president Tokuo Fukuichi spoke candidly about Lexus design becoming even stronger and more distinctive in the future. Fukuichi was the former global design boss for Toyota, and as we discovered, merely making ‘nice’ designs is out, and ‘impressive’ is firmly in… Tokuo Fukuichi was speaking to Guy Bird.

Q: Will you push Lexus design even more strongly now you are the overall president too?
A: Tokuo Fukuichi: From now on I don’t want to create nice designs, I want to create impressive designs, ones that remain in minds. I should add that Lexus already started taking this turn since a couple of years, with the spindle grille as symbol heralding the change, plus acclaimed coupe concepts LF-LC LF-CC and LF-NX, now the production models IS, RC and RC F, and of course NX. But in future, we will push even harder.

That’s great to hear, do you think Lexus still needs to stand out more?
A: We do a lot of surveys and what we find is that in the past, Lexus has created cars that nobody really dislikes. They’re liked by everybody… but they’re not really loved. They don’t remain impressed in people’s hearts and minds, and that’s the main point I want to change, in part by giving new characteristics to the front face.

Q: Is there a danger your new presidential role will distract you from designing these great new cars? How much time will be left for design?
A: I’d like to give about 80% of my time to design, but I think that’s not realistic, it will probably be about 50-60%. What [Toyota Motor Corporation CEO] Akio Toyoda wants from me is to improve the Lexus brand image. He doesn’t really want me to do management. I have very valuable and precious collaborators, so I’m confident they’ll help me to deal with the management and sales part.

Q: What steps are you taking to enhance the Lexus brand further?
A: It’s important to improve market share but it’s not my main focus as I think keeping and improving on very high performance, quality and safety will create a strong and attractive brand image. And when you have a strong brand image, sales will improve naturally. We also have to change the body style to a low and stable-sided one, which will help performance. Creating a completely new body architecture that no other car brand has is very important in terms of design.

Q: In terms of your earlier ‘nice’ vs ‘impressive’ analogy, the 2013 LF-NX concept was extremely bold, indeed some critics thought it went too far to stand out. Why did you make it so dramatic?
A: We did this on purpose, we chose the most difficult idea. It was a show model, but still from now on we would like to create cars that impress and surprise people, and most important of all, we won’t follow any other brand.

See also:
Inside the Lexus Design Center
Lexus LF-NX: Designed to Stand Out