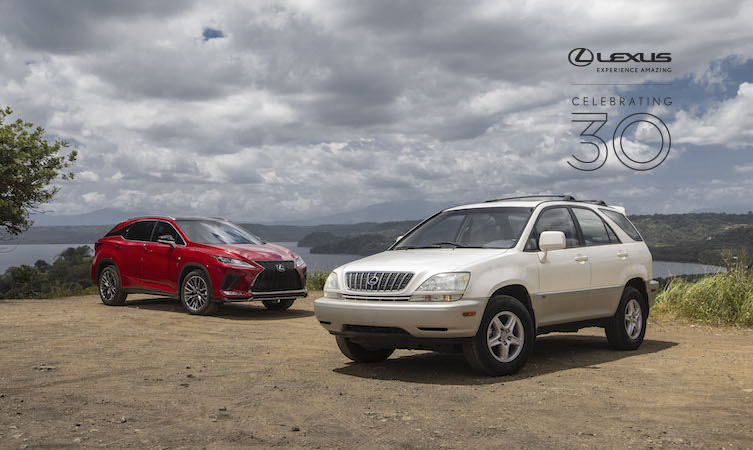 The history of the Lexus RX can be traced right back to 1993 when the idea of a vehicle that combined the on-road performance of a luxury saloon with the raised driving position and go-anywhere functionality of a sports utility vehicle (SUV) was first mooted by Toyota executives. This meeting was held prior to the May 1994 launch of the RAV4, a car that holds claim to being the world’s first car-based and monocoque-bodied compact SUV.

Development of this new luxury crossover started in earnest in 1994, and by the end of 1995 the final design had been signed off. Prototype vehicles entered a testing phase in early 1997, which coincided with the public debut of the Sport Luxury Vehicle (below), or SLV, concept at the Chicago Auto Show.

The production car was launched in Japan in December 1997 as the Toyota Harrier, and then released to export markets from March 1998 onwards as the Lexus RX 300. From the outset it became the best-selling model within the Lexus line-up, securing half of all sales.

Its unitary construction was essentially a raised and reinforced version of a contemporary saloon car platform, which afforded the vehicle a ground clearance of 185mm – enough to cope with almost any off-road condition a suburban SUV might encounter. Unlike more utilitarian off-road vehicles, the RX’s body was purposely sleek and passenger-oriented, with a spacious cabin that even allowed walkthough access between the front seats.

There were three petrol engine options, all of which were transversely mounted. The base unit for the domestic market was a 2.2-litre 140hp four-cylinder (front-wheel drive only), while the 3.0-litre 220hp V6 found throughout all markets could be specified in either front- or four-wheel drive formats. The only transmission available was a four-speed automatic with ‘steermatic’ shift buttons on the steering wheel.

A mid-life refresh was applied in 2000, which among other items included crystal-style headlights and rear lenses. It also included a 2.4-litre 160hp replacement for the original four-cylinder powerplant – an upgrade that allowed the entry model to also be available in either front- or four-wheel drive variants. This facelift also marked the vehicle’s first official appearance in the European market, where it was marketed as the RX 300 and only delivered with the more powerful 3.0-litre engine mated to four-wheel drive transmission.

The RX 300 effectively created the luxury crossover segment and remained on sale for five years, selling around 370,000 units worldwide. By the time of its replacement the model was still selling strongly but a number of competitors had now muscled in on the market. So the second generation model was designed to advance the original concept, being greater in terms of size and power, while simultaneously more efficient and less expensive.

The new RX arrived in February 2003, just one month after its preview at the Detroit motor show. Its all-new but evolutionary styling was clearly sleeker than before, evidenced by an improved 0.35Cd drag coefficiency figure (earlier version was 0.36Cd), while for the majority of markets the engine and drivetrain combinations were almost identical.

The only differences were that the 3.0-litre V6 now came with a five-speed automatic transmission and top-grade four-wheel drive models could be specified with electronically controlled air suspension. The North American market was unique in being supplied with a larger, 3.3-litre 230hp version of the original V6 engine. Because of this it was called the RX 330.

Diesel power has never been offered in the RX but a new full hybrid model appeared in March 2005 (June in UK). Not only was this the world’s first production premium hybrid vehicle, it marked the launch of the renowned Lexus Hybrid Drive system.

The model’s full-time four-wheel drive hybrid drivetrain combined a slightly de-tuned 211hp version of the 3.3-litre US-spec V6 engine with a small but powerful high-voltage, high-speed electric motor offering 167hp. This combination drove the front wheels via a CVT gearbox and a newly developed reduction gear, while the rear wheels were driven by a second, entirely independent electric motor with a maximum output of 68hp. As a full hybrid, the car was capable of being operated in both petrol and electric modes alone, or in a combination of both.

The combined system output was 272hp, a figure on par with that of a 4.0-litre V8 engine. And so to emphasise this performance equivalency, the model was named the RX 400h. With the ability to accelerate to 62mph in 7.3 seconds and sip fuel at a rate of 34mpg, it was the fastest yet by far the most economical version of the entire RX range, qualifying in the United States as a Super Ultra Low Emission Vehicle.

A minor change was applied to the second-generation RX in January 2006, whereby the 3.0-litre engine was replaced with a larger yet more efficient 3.5-litre engine (above) with Dual VVT-i. From then on the car was known as the RX 350. Prior to this, however, development of the third-generation model had been progressing since 2004.

A preview of the next-generation RX could be ascertained from the LF-Xh (Lexus Future-Crossover hybrid) concept at the 2007 Tokyo Auto Show, one of a range of LF-badged concepts shown since the mid-2000s that materialised as the new Lexus L-finesse design language.

Production of the slightly larger and more accommodating third-generation car began in January 2009, which also marked the cessation of the Harrier name and the first time that the model was solely marketed in Japan under the Lexus brand. Lexus was launched in its domestic market in July 2005, so this was the first opportunity for the premium luxury SUV to be known throughout the world as the Lexus RX series.

As the previous generation RX 400h was by far the most popular version in the emissions-conscious European market, the new RX 450h hybrid was the only model officially imported to the UK.

In an improvement of the original series/parallel Lexus Hybrid Drive system, the new model used a 249hp version of the 3.5-litre V6 engine found in the regular RX 350 (a 2.7-litre four-cylinder engine was also available in some markets) and the same combination of 167hp and 68hp electric motors for the front and rear wheels respectively. Total power was now up to 299hp, offering performance equivalent to that of a 4.5-litre engine – hence the new RX 450h tag – but allied to parsimonious 44.8mpg economy and earth-friendly 145g/km CO2 emissions. Bearing the results of over a decade of experience in full hybrid powertrain technology, the current RX was widely regarded as the best-in-class.

A mild refresh in 2012 introduced a spindle-shaped front grille (above), a central element of the latest L-finesse design language, as well as a number of important specification upgrades. The RX 450h was now available in four grades, including a new F Sport version with sharper looks and performance.

The current, fourth-generation RX made its world debut at the New York International Auto Show on 1 April 2015. The date might have been synonymous with practical jokes but this was an important moment in Lexus history, for the RX was the brand’s best-seller and represented 30% of worldwide production. Around 2.2 million examples had been sold since the model’s introduction in 1998.

The new model therefore built on that achievement with a completely redesigned, luxurious interior, wrapped in a chiselled new body with a longer wheelbase. Lexus brand DNA was artfully incorporated into the details, things you could feel as well as see. It also yielded superior on-road performance and new safety technologies, including the innovative Lexus Safety System+.

According to market, the launch engine range consisted of three options: an upgraded and more powerful 3.5-litre V6 petrol mated to an eight-speed automatic transmission; a full hybrid powertrain based around an improved, Atkinson cycle 3.5-litre V6 petrol engine; and a 2.0-litre turbocharged four-cylinder petrol engine with six-speed automatic transmission.

UK customer deliveries commenced in January 2016, with the range limited to either the RX 450h or RX 200t variants. The balance of sales was weighted heavily in the favour of hybrid, so a year later Lexus stopped availability of the downsized turbo powerplant from the RX line-up.

Meanwhile, in 2018, a new seven-seat RX 450h L model (above) was launched, which offered customers the option of an additional row of (two) seats, without compromising the sleek styling and easy manoeuvrability of the standard RX. This was achieved by extending the body by 110mm and using a steeper tailgate window angle to create comfortable head- and legroom, and generous luggage space.

Click the following links to learn more about the current Lexus RX and RX L models, which have been updated for 2019 to offer subtle styling tweaks, the latest Lexus Safety System+ portfolio, new suspension components, innovative BladeScan adaptive headlights, and new connectivity functions for the multimedia system that include the addition of Apple CarPlay and Android Auto.