Skip to content
Home Brand Stories Design Could these five concepts be the taxis of the future? 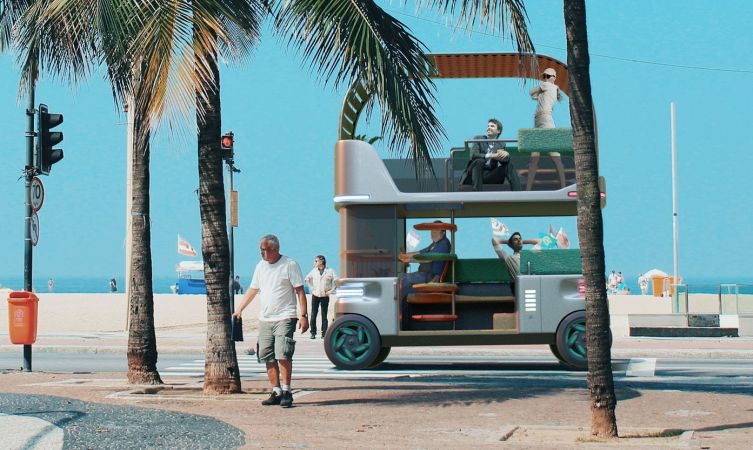 Future mobility is a hot topic, explains Nargess Banks. As more people flock to cities, and as cities swell into megacities, safe and sustainable urban transport is of particular urgency. A Royal College of Art design competition set out to address this, with first-year MA students studying Intelligent Mobility tasked to imagine what a megacity taxi would look like in 2040. Their ideas were intriguing. 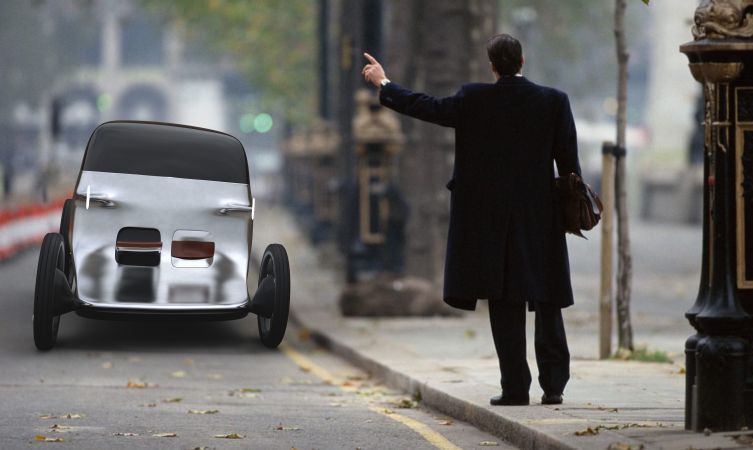 “Discussions on smart cities often miss the cultural side, the social aspects and nuances,” said RCA programme leader, Chris Thorpe. “We wanted to do something that was cohesive while seeing how megacities could be sustainable. So we asked the students to pick a preferred megacity and deliver a taxi system that could bridge these elements.”

As we enter the most significant shift in the history of transportation, vehicle design has evolved to become much more than creating sophisticated surfaces. The industry is reflecting these changes, with companies such as Lexus pioneering cutting-edge design and technology that will help reach more sustainable transport solutions.

Modern vehicle design requires a new level of critical thinking, and the RCA has revised its world-leading vehicle design degree accordingly. Research and design thinking are now central to the programme, with the megacity taxi project being a reflection of this approach.

The following five projects were nominated by Thorpe as excellent examples of innovative thinking on the theme of the megacity taxi of 2040.

The setting is Osaka in 2040 with manmade islands housing a population faced with severe flooding. The Osaka Do taxi is a floating catamaran carrying the experience capsule. Saka explains: “It reconnects the islands with the mainland but also reconnects humans to the place Osaka.” Her concept finds beauty in imperfection, honouring both the vehicle and the city’s past with all its flaws in what is a nod to the old Japanese principle of wabi-sabi – appreciating beauty that is imperfect, impermanent, and incomplete. 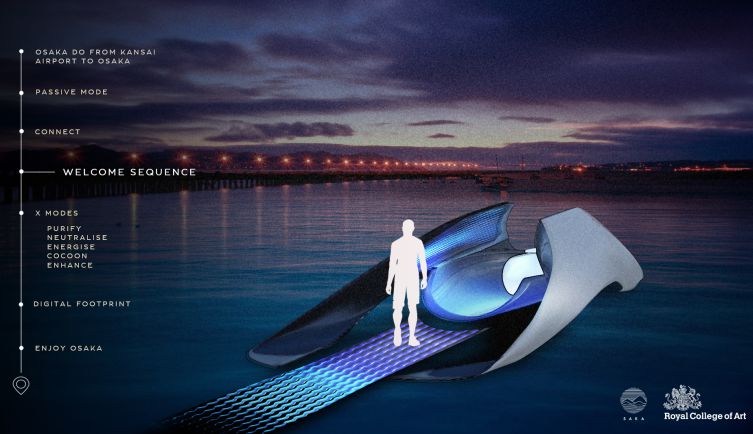 With a background in user experience design and coding, Saka’s concept is based on her learnings from this field. “The digital world is dynamic,” she says. “It enables us to tell and capture stories in a more immersive, emotional and interactive way.” Her taxi makes each journey into a real-time light painting projected on the morphing pattern in the interior. In turn, each journey shapes the taxi’s artificial intelligence, so the vehicle and experience become richer with each trip. 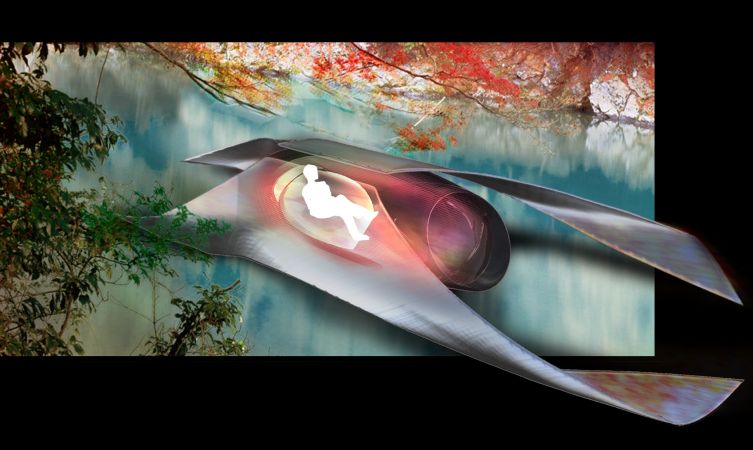 Various digital footprints create a mosaic of Osaka for a new interpretation of wabi-sabi and add an additional layer to the story of the city. You can curate the experience according to your mood, and each experience is saved in a journey library. Saka says: “I’m fascinated by the magic technology can bring to the world.”

London of 2040 is a city with walkable zones that span half the size of the current congestion charge area. Londoners travel around on an autonomous and seamless transport network that is powered by harnessing the tidal capacity of the River Thames through Archimedes water screw systems. Electric skateboard chassis technology enables Martin’s Vision Bersey taxi to maintain its nimble quality to zip through narrow urban streets.

The original 1897 Bersey electric cab influenced the design with what Martin calls, “An eclectic mix of characteristics”. The egalitarian vehicle can carry four internal and two external passengers, offers a hop-on, hop-off system similar to that of a London bus and has a compact lift capsule to transport a wheelchair.

“This open-space electric cab is designed to meet the needs of Rio de Janeiro residents – workers and tourists – but especially the favelas,” explains Janel. The vehicle has two floors yet is nimble enough to move freely in the narrow spaces of these dense, informal settlements in Brazil’s urban areas, while the open-space configuration encourages users to communicate with their surroundings. 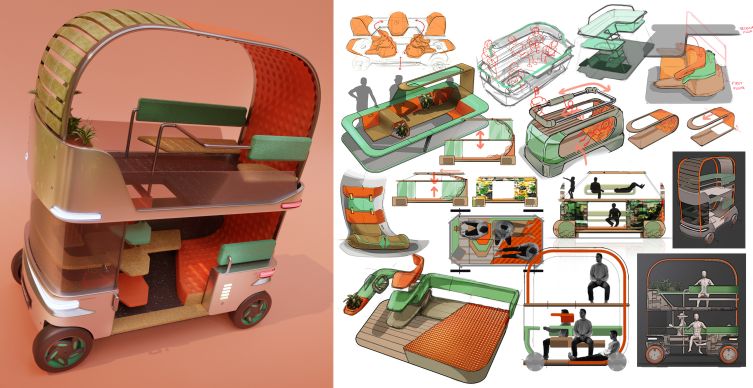 Janel worked with different layers of inventive sustainable materials for his project. He explains: “The aim was to represent the spirit of sharing within the favelas and to transmit it to other passengers through the cab. Here, informality is the keyword that helps people feel comfortable and free to leave for the length of the trip.”

Inspired by architecture, the Kaali-Peeli taxi for Mumbai in 2040 has a rich narrative arc. It also has spiritual roots. To start with, the vehicle embraces the cultural belief that a ‘Guest is our God’, which Asundaria explains is to “serve humanity with its dynamic nature, to transform itself, inside and outside, according to the user’s identity and needs.” His is a rich deconstruction of social life – interpreting man’s relation to the earth and society.

The project works with the concept of regenerative design. “It does this through ‘wise materialism’ – its ability to regenerate from the source, so it can merge into the architecture, and cause materiality in rotation,” says Asundaria. 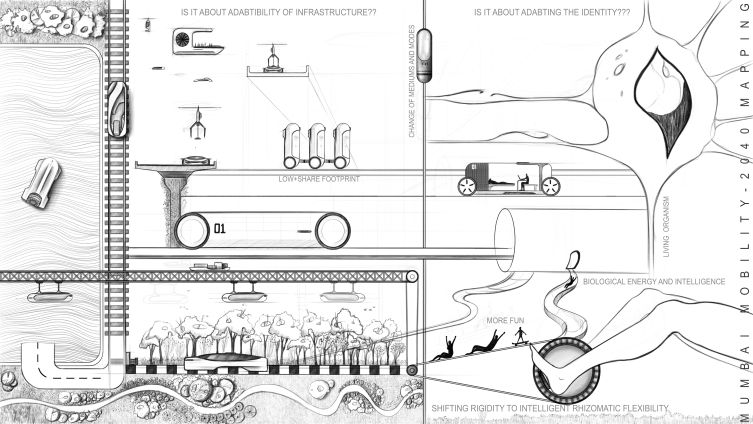 Technology meets spirituality with the geometric material weave inspired by Shiva Shakti – the divine union of consciousness and energy – and an active AI assistant on board this vehicle. “The 2040 version of the design resembles a neutral identity which is a transitioning stage for it to arrive at the stage of an AI synthesised living organism near to the end of century.”

These shared autonomous vehicles for a London of 2040 have been humanised through the positive emotions of their users. “They promote the celebration of empathy and emotions in the London urban environment of the future,” says the designer. As a Spaniard in the capital, he has found the city a touch grey and unfriendly, and his vision is here to cheer up the landscape. 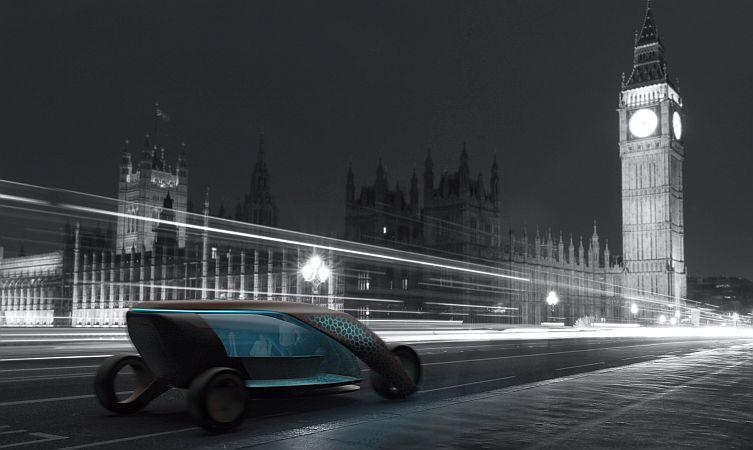 The vehicles embody and then express their users’ emotions and feelings through light and colour, which permeates from the inside out via micro-perforations with optic fibre in the structure. In turn, the tactile wood covering that embraces the interior allows outsiders to communicate with occupants, sending a caress of light for another layer of interaction between the vehicles and society. He says: “The vehicle actively addresses the emotional distortions created by technology, promoting emotional intelligence to increase the quality of life of society.”