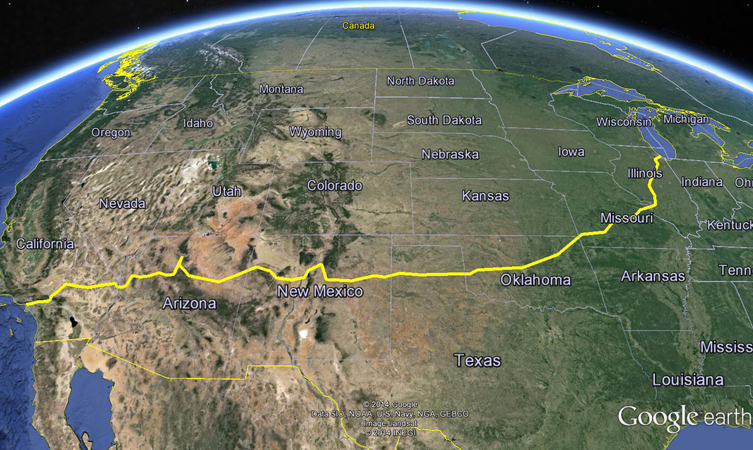 I drive an early Lexus LS 400, one that’s been rather distastefully decorated to look like that famous car from The Dukes of Hazzard. The General Lee(xus), as it’s affectionately known, is used for long-haul drives across Europe as part of rallies raising money for charities such as Sparks and BEN.

To this day it’s still a wonderful ride, with refinement levels that the latest cars barely manage to equal. After more than 20 years on the road, the only thing that is less than perfect is that one of the LCD displays on the climate control is a little dimmer than I’d like. It really is quite remarkable.

Now that the LS model has been in the UK for almost 25 years, I wondered what the latest incarnation is capable of. How big a step forward has been made, and is it still the right car for a massive road-trip?

I needed a suitable destination. The Lexus LS was designed in California, so it made sense to head there. While it’s not celebrating its own anniversary this year, Route 66 is knocking on the door of being 90 years old. The fact that one end is in the Golden State was excuse enough to commit to making the drive.

Originally conceived to link the rural areas of America to the big, and rich, cities, Route 66 became an iconic road not just in the US but across the world. Running from Chicago to Los Angeles, the 2,400 miles or so of tarmac wasn’t always tarmac – many miles were (and still are) nothing more than dirt roads, while around McLean in Texas the infamous Jericho Gap is just a mud pit in an otherwise dry and barren dessert.

Even worse was La Bajada Hill, an area south of Santa Fe that even today is a formidable test for the best 4x4s. I’ll probably skip that bit.

Time has improved the route immeasurably though, at least until it was finally replaced with the soulless Interstate motorway in 1985. Stay off the I-40 and most of the old Route 66 still exists, from the broad sweeping curves of Missouri to the first ever freeway in Los Angeles.

That’s not to say it’ll all be plain sailing: some of those areas of the original route that are still dirt tracks will be tackled. I’ll also need to avoid the wild burros that roam the roads around Oatman, and there’s the very real danger of tornadoes around Oklahoma.

I’ll be facing all that Route 66 has to throw at me in the comfortable and relaxing confines of the 2014 Lexus LS 460. It might not be how the original pioneers traveled in 1926, but they were never ones for standing still.

We’ll be updating the blog over the coming days with Phil’s adventures as he crosses America.

Find out more about the Lexus LS on the Lexus.co.uk website.