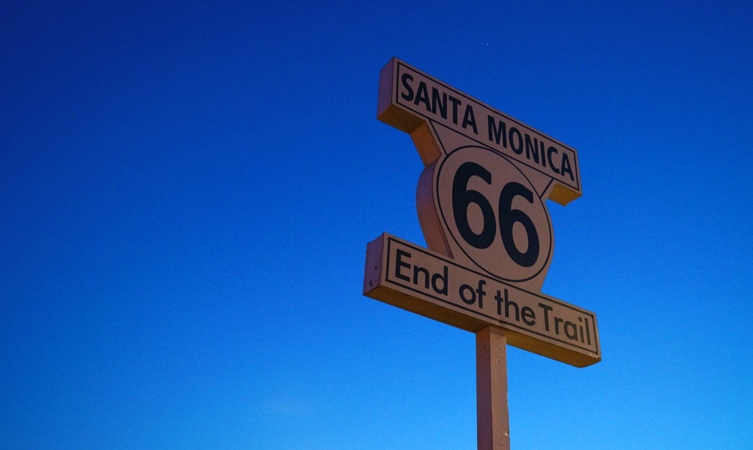 Part 3
Taking the Lexus LS 460 along Route 66 isn’t the hardest thing I’ve ever done. The first 1,139 miles passed by in a supremely comfortable blur, with rolling countryside eventually giving way to the edge of the sandy desert areas of Texas.

Reaching the halfway point in Adrian, Texas, I wondered what might lay ahead. The answer, seemingly, was sand. Lots of sand.

The Mother Road took me towards Santa Fe in New Mexico, climbing 7,700 feet in to the Sangre de Cristo mountains, a sub-range of the Rocky mountains, and the temperatures rose with it. The LS’s climate control had been set to a cool 21c since I left Chicago, but now it was time to turn the ventilated seats on too.

Santa Fe only briefly appeared on the original Route 66, with the pioneers of the time deciding that it was just too remote to bother with and so eventually the road was realigned and Santa Fe was left to its own devices once more. Still, as one of the oldest towns in the country, it’s not doing too bad.

Part of the reason to abandon the route was probably due to La Bajada Hill, a steep drop you encounter when leaving the area. Now bypassed (fortunately) I headed backwards to the bottom of the hill to see what the fuss was about. What I saw was a rocky off-road route that would thoroughly test a Toyota Hilux, let alone the luxury limo I was in.

Back on the roads, the New Mexico highways provided some of the most interesting sections of ‘66 so far, with vast plains sweeping between steep mountains, the road curving along rocky cliff edges and, on occasion, turning in to nothing more than a flat and solid dirt road.

These led to the continental divide, the point at which water either flows to the Pacific or Atlantic ocean, and the point at where I felt I was finally getting nearer to the west coast.

A quick detour through the breathtakingly beautiful Painted Desert put me in Holbrook, Arizona, for the night. That’s where you’ll find one of two remaining wigwam motels on the route. Famous for being the inspiration behind the Cozy Cone motel in Pixar’s Cars movie, it’s obviously where I chose to stop overnight.

West of Holbrook, the desert really takes over. There’s nothing for miles around, until you reach a big hole in the ground. Created by a meteor impact some 50,000 years ago, it’s another reminder of just how fragile we really are on this planet.

Further up the road, I took another detour to another big hole in the ground. Slightly more famous, the Grand Canyon looked so magnificent that I filled up more of the 560 litres of boot space with a tent purchased to use for just the one night at the rim of the canyon.

Leaving one of the undisputed wonders of the world behind the next morning, after barely any sleep, it was then through the twisty roads that weave their way through the Black Mountains, the tarmac rivalling some of the best offerings from Switzerland. The LS showed that, while it’s never going to be a sports car, the chassis dynamics were strong enough to allow plenty of confidence, even in those areas where there was nothing to stop you falling back down to the desert.

Slap bang in the middle of the desert is a sight many will have seen over the Thames. The old London Bridge now sits in Lake Havasu City, a monument to a man’s ambition to build a city in the desert. Robert McCulloch Sr bought the bridge in the 60s and had it shipped to Arizona, reassembling it brick by brick to attract buyers to his city.

Continuing west, the Mojave desert spread out in front of me. Taking the old road rather than the interstate meant spending 120 miles in the middle of the Mojave with no petrol stations, no cafes, no water stops. Just the Lexus, me and what remains of Bagdad…

This small town was bypassed in 1973 and died almost instantly. Stuck in the middle of the desert, and holding a record for going 767 days without rain, all that remains there now is a single tree, standing proud in the middle of a vast plain.

From there to Los Angeles, there’s little to see or do. The other remaining wigwam motel looks large on the route at San Bernardino, then it’s just a long slog through the LA megalopolis.

If the scale of the desert was tough to grasp, nothing prepared me for just how big the urban sprawl of LA is. I’d hit heavy traffic, dense urban areas and endless retail business; I was nearly there! Then I looked at the Lexus Premium Navigation system and saw that there were still 70 miles left to cover. I was nearer Palm Springs than Santa Monica.

Three hours later, I rolled the Lexus LS 460 up on to Santa Monica Pier. Shutting the car down, I sat for a few minutes and realised just how far we had come together.

My own 21 year old LS 400 paved the way for Lexus, being a new luxury car that was markedly better than anything that had gone before it. Now 25 years after its introduction, the LS continues to improve, getting more luxurious, safer and more efficient with each iteration.

Route 66 was something special for the US and, like the LS, the newer interstates are undoubtedly safer, more efficient and considerably quicker. On this occasion though, that doesn’t make it better.

By improving what was there, America has taken away some of the magic from the road. The interstates are simply for transporting people from one place to another, while Route 66 is a journey to experience and savour.

And there are few better cars to do that in than the LS.

For more information on the LS, visit the Lexus website.