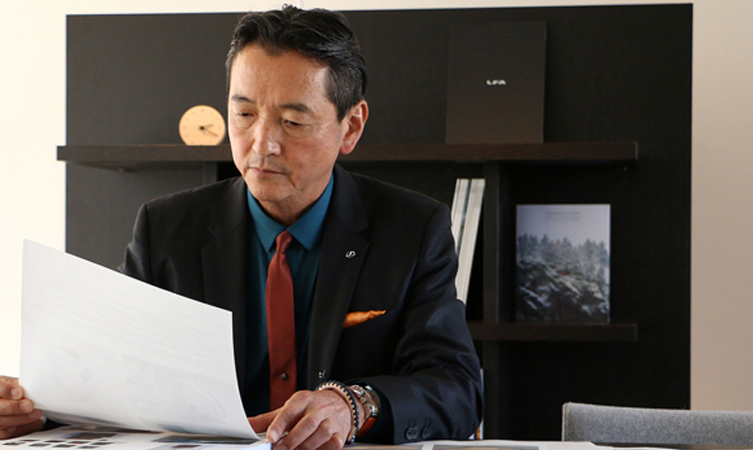 High-ranking car executives almost always have a fascinating hobby. Sometimes it’s the size of their garages and the contents within, other times its another form of transport “physical or spiritual” that enables them to escape the pressures of their everyday roles. For for Lexus president Tokuo Fukuichi, it’s an altogether different hobby. Eric Gallina sat down with Fukuichi-san for a candid interview.

Tokuo Fukuichi has a lot on his plate. Besides presiding over Lexus, he is also responsible for Scion and Toyota’s newfound design direction, initiated by him at the behest of Akio Toyoda, grandson of the company’s founder.

As if that wasn’t enough, Fukuichi also has a seat on Toyota’s board of directors, one of the few designers to ever hold such an esteemed position. But while the 62-year-old designer has a lot to watch over, he doesn’t look his age. Could it be those trips to the sauna and his relaxed work ethic?

How would you say your life has changed since being on the board at Toyota and in charge of overseeing the entire Lexus brand? Has that impacted the way that you go about your typical day?

TF: [There’s been] no change. I believe there shouldn’t be a change. At 5:30pm, if I have no further appointments of schedule I will be at home.

How very un-Japanese of you…

TF: That is what everyone says! The designer might be drawing in his office, but he is actually thinking about design 24 hours a day. If you’re just sitting in a sauna, you can’t get information from your eyes or your ears, so your brain’s RPMs rev up very quickly and you get lots of ideas. Five minutes later you realise you’re very hot in the steaming sauna so you pop outside and your idea gets solidified…

As head of design for two disparate brands, how do you keep the Toyota and Lexus brands separate in your mind?

TF: We have a design philosophy for Lexus and one for Toyota; Lexus is L-Finesse, and Toyota is Vibrant Clarity. The role of the Toyota brand versus the Lexus brand is different. The Lexus brand is a premium brand and our target customer is first of all affluent, they are mature drivers.

Toyota has cars in all different parts of the world and the target customer for this brand are the hundreds and millions of people who have not yet benefitted from having a car, including those in emerging markets. For the Toyota brand we need to respond to the needs of a more versatile customer base. The way we look at designing for the Toyota brand is diversity and for the Lexus brand it’s targeted towards mature customers, so consistency.

I’ve heard you described as a spiritual guardian for the Lexus and Toyota brands. How would you describe yourself?

TF: I would not think of myself to that extent. However I am heading the design, and though I’m not the one originating the ideas. I have high calibre members working for me who come up with many, many ideas. I will make the judgment of which one to select, so I am like the filter.

Your approach at Toyota Design – and with Lexus in particular – has been to push through some very non-conformist designs. How do you help these brands reinvent themselves through design without alienating customers?

TF: Within the premium brands, there are the German three: Mercedes, BMW, and Audi. We have to consider how Lexus should position itself against the German three. So I think to myself – what would make Europeans buy Lexus?

Toyota led for a long time in terms of hybrid technology, but everyone now seems to be catching up. Design is the key differentiator. For Lexus you came up with very bold identifiers – the spindle grille the separate DRLs for the headlamps. What’s the next step in elevating Lexus’s perception in the world, in Europe and in emerging markets?

TF:  We will continue with the concept of the spindle grille. We have to surpass the customer’s expectations because what the customers expect is the ‘expected’ [as you can see in this diagram]. But if we decide on this ‘expected’ design theme when we come out with this product two years down the road and we will be way behind. We’re therefore not aiming for the expected because by the time [the car is revealed] it will be expected or even conservative. We have to aim for the unexpected.

When we decided on the design for the NX, which was over two years ago, there were three ideas that we looked at. The one we chose wasn’t the best idea at that point but we developed it. My selection criterion was that I wanted to go a different direction than the German three, so while it might not have been yet complete we still had time [to refine it], so I focused more on the originality aspect.

Against the wishes of some of your more conservative board members?

TF: Of course the other ideas scored higher, but if we produced a car along that line then we would have come up with a car that was quite similar to the German three. I intentionally rejected those ideas and chose the idea that was very similar to the original NX that you see. At the point of selection, which was over two years ago, if I had selected the lowest risk design at that time, two years later it would have become the highest risk item.

You clearly have a vision of where you’d like the design to go so. How heavy handed are you with choosing the direction when these designs are brought to the table?

TF: I have to take responsibility. I am responsible for the final decision. What is most important is to give mental and spiritual freedom to the designers, so you have to create an environment where the designers have the psychological freedom to come up with ideas. I personally believe that my capacity is not that broad, and therefore I want to get as many ideas that are as broad as possible. If I see an idea that I didn’t even think of I tend to treasure that.

Your boss Akio Toyoda has a reputation for being involved in a lot of extra curricular activities involving the automobile. Are you as much of a car guy as he is?

TF: Not necessarily. My hobby is tin toys from the 1950s. I have the typewriters too…  I’m not as much of a car guy as he is, and I’m not a great driver either. However I am quite fussy about the shapes and the form of the car.

What’s in your garage right now?
A [Lexus] IS.