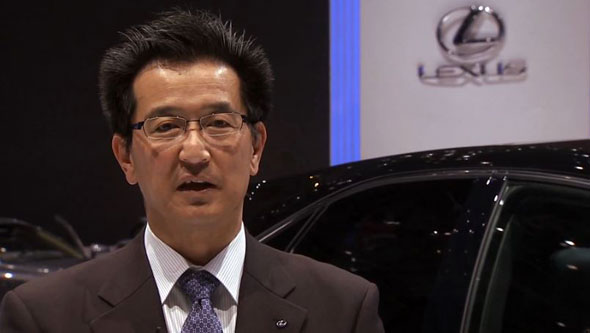 Imagine being responsible for creating the next version of the world’s first hybrid SUV, the only model in the Lexus range with an extra production line outside Japan, and the one that now accounts for almost 40 percent of total Lexus sales.

That’s been Chief Engineer Takayuki Katsuta’s job for the five years building up to the launch of our latest 2013 RX. No pressure, then.

But if this surprisingly young-looking 50-year-old is feeling any pressure, he isn’t showing it. When he’s not modestly describing the changes to what could be the world’s most painstakingly evolved and engineered car, he’s chatting about his grown-up twin daughters, his passions for fishing and flying – and his love of James Bond movies.

The question remains, though: how do you improve a car that’s still setting new sales records fourteen years after launch? Many would subscribe to the old saw of ‘if it ain’t broke, don’t fix it’, but that’s not how Katsuta sees it.

“There’s always a need to refresh any car, to maintain interest,” he says. “But you also have to strike a balance with maintaining the heritage of the car.

“The RX has a good heritage. Every time I visit dealerships around the world, I see first-generation cars coming in. Owners love the RX’s flexibility and reliability. Keeping up that sense of customer connection is a high priority for me.”

So, for the last five years, Katsuta has been focusing on RX perfection. Team members at both RX plants in Kyushu, Japan and Cambridge, Canada, have taken the takumi mindset of craftsmanship to a new benchmark of excellence, by self-imposing new engineering tolerances at a scarcely believable one-third of the required specification. The result for the new RX is an award-winning level of what could be called ‘extreme quality’.
“Adopting the takumi mindset is one thing, but incorporating it into a mass-production vehicle line is something else,” says Katsuta. “I’m very proud of our RX plants in Japan and Canada.”

After graduating in Mechanical/Aeronautical Engineering, Katsuta joined the Toyota chassis design department in 1985 as a suspension specialist. He moved to Brussels in 1999 as a chassis design coordinator for European cars before joining Lexus in 2004. Those formative years in Europe gave him a keen interest in handling that’s reflected in the new RX’s significantly increased body rigidity.

“An SUV is obviously at a handling disadvantage because of its greater height,” he says. “My intention for the new RX was for a more linear, natural, and confident performance that appeals to the customer’s driving sense. When a turn is initiated, the driver’s wish is smoothly translated into action, with no delay. Great body rigidity is absolutely central to that idea.”

That rigidity comes from a new spot-welding regime that puts many more welds into any given section of bodywork, greatly strengthening the body structure and tightening responses. In the new RX F SPORT, special suspension tuning, new performance dampers and rear stabiliser brace deliver an even more dynamic drive. All RXs benefit from the aerodynamic modifications developed by Koushi Yamada.

They also benefit from Katsuta’s extreme focus on detail. Besides the new steering wheel there’s a new centre console. “After listening to owners, we’ve greatly increased the lid’s opening angle and moved the USB port up for better accessibility.” He’s created a ‘hidden space’ at the front of the console for the owner’s manual – great news for those of us who resent our glove boxes being taken over by huge manuals. “That’s an extra present to RX owners from me,” smiles Katsuta.

Outside, there are new light treatments, bumpers, alloys and of course the new ‘spindle grille’. “I think the grille is a very good match for the RX,” nods Katsuta. “Its proportions really suit the car’s deeper frontal aspect.” The F SPORT gets special interior hues, perforated leather seats, aluminium pedals, coordinated logos, and a new colour for the alloy wheels.

Looking ahead, what kind of car might the RX of 2022 be? “I think that the generic phrase ‘Sport Utility Vehicle’ will be replaced by something like ‘Crossover Utility Vehicle’,” says Katsuta. “It will be more than an SUV. Functional, stylish, and of course eco-friendly – the 2022 RX will be all of those things.”

And more, if ‘Doctor RX’ has anything to do with it.