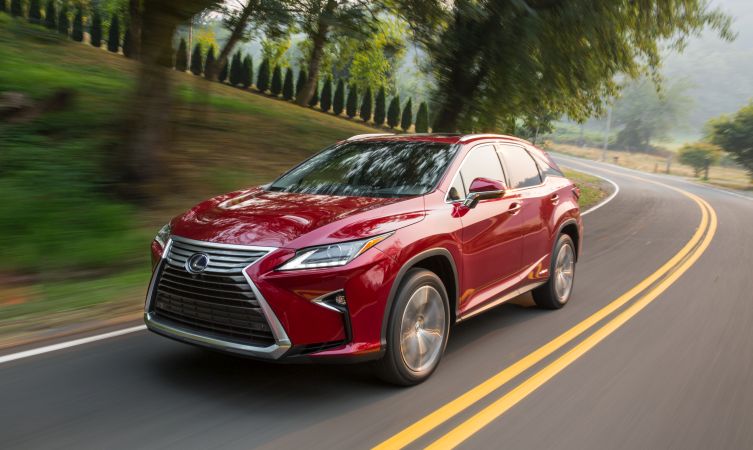 Making its headline appearance on the Lexus stand at the 2015 Frankfurt Motor Show is the highly anticipated new Lexus RX.

As the perennial best-seller in the range, this next-generation model is very important to Lexus. Attention to detail can be experienced throughout the vehicle, so we wanted to briefly shine a light on ten standout features  designed to make life easier, safer and more interesting for its owner. All are either new to the RX, new to Lexus, or world-first technologies.

The new Lexus RX possesses a sharp mix of creases and curves, which are a bold evolution in the model’s styling. It shares the same athletic design language as other recently launched models in the Lexus line-up.

A first for Lexus, the new smart power tailgate allows users to open the rear hatch by placing a hand (or elbow, if the user has both hands full) near the Lexus badge.

The Lexus RX features a world-first cup holder design with a vertical sliding height adjustment mechanism. At the push of a button the cup holder can accept everything from tall plastic bottles to traditional aluminium drink cans and short to-go coffee cups.

An important but often unappreciated new design feature is an expanded field of view through the windscreen, which offers the driver a more precise estimation of vehicle width. Meanwhile, blind spots have been reduced by making the A- and C-pillars narrower and repositioning the door mirrors further back.

Among the numerous visual and performance features of the new RX F Sport is an exclusive combination instrument cluster. The 8.0-inch LCD screen is characterised by a large, easy-to-read circular gauge that combines tachometer and digital speed indicator.

The RX is the first Lexus hybrid to be available with an optimally tuned sound generator system. It produces a performance-oriented intake sound by using air intake pulses to raise the sound pressure level with three distinct resonance frequencies.

A 238hp turbocharged 2.0-litre in-line four-cylinder engine is a new addition to the range, delivering a blend of fuel economy and driving performance. The unit is characterised by crisp throttle response and instantly accessible torque throughout the rev range.

The new Lexus RX is available with an innovative and world-first active anti-roll system that stabilises the suspension when cornering and travelling straight. The system calculates the damping force that might occur with any sudden movement and simultaneously creates a counter force to the anti-roll bars, providing the sensation that the vehicle is invisibly ‘hooked’ to the sky.

The RX is the first Lexus model to offer a special ‘Customise’ driving mode that enables the user to fine-tune the combination of engine, hybrid system, chassis and air conditioning function according to his or her preference.

As part of a suite of Lexus Safety System+ technologies, the Lexus RX is now able to use its dynamic radar cruise control in tandem with an advanced Lane-Keeping Assist function to provide automatic steering inputs at very low driving speeds.