Skip to content
Home Other Skyjet: the Lexus space craft from the Valerian and the City of a Thousand Planets movie 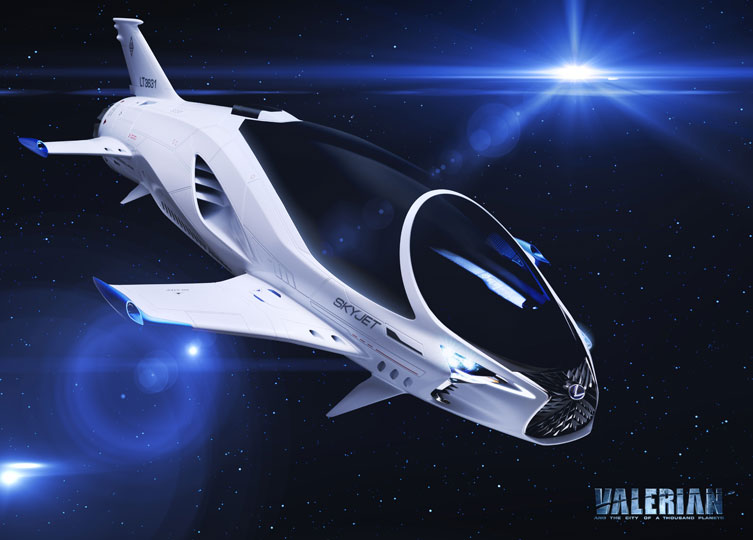 Valerian and the City of a Thousand Planets is one of the most eagerly anticipated movies of the summer. Set 700 years in the future, the movie will feature the Skyjet, a single-seater pursuit craft.

The Skyjet was created by the Valerian team with the ambition of featuring a vehicle grounded in reality, but befitting of the Valerian world.

The final design incorporates an interpretation of Lexus’ signature spindle grille, and a similar headlight design to that of the hotly anticipated 2018 Lexus LC coupe, defined by an athletic and aerodynamic shape.

What’s more, when designing the interior of the concept model, the Valerian creative team were inspired by the brand’s latest developments in AI and advanced HMI technologies. The narrative is also set to incorporate an imagined energy capsule of the future, inspired by Lexus’ work on innovative hydrogen fuel cell technology.

Below is everything you need to know about the space craft.

Primary Function
Skyjet is a specialised single-seater military-type vehicle built for highly trained agents to on missions across the galaxy. Laurent Bouzige, designer at Lexus’s ED2 European design centre, sees it as a hybrid between a “space bike” and a fighter jet. It makes great use of artificial intelligence (AI) in its operation, notably in the interface the pilot uses to control the aircraft.

Exterior design
The design inspiration for the Skyjet came from an original sketch by Ben Mauro, concept designer for Valerian and the City of a Thousand Planets. His vision for the exterior was especially influenced by the natural world and he took inspiration from animals such as dolphins, whales and sharks to create a very fast and aerodynamic-looking design.

He also looked at man-made objects such as fighter jets, luxury single seater submersibles and other aquatic/flying vehicles to make sure the scale and level of detail was suitable for the Skyjet in the context of the imaginary world created in the film.

There is no atmosphere in space, so the Skyjet (and any other spacecraft) doesn’t need wings in order to fly. However, as it is a multi-purpose vehicle used for many different missions/scenarios, it does need to be able to fly in different atmospheres and gravities close found close to the surface of planets, so its design does take conventional aerodynamics into account.

Construction Materials
Skyjet would be made from a military grade advanced metal material capable of withstanding any blasts and attacks from various alien technologies and weapons.

Top Speed
The top speed and altitude limit would be comparable or exceed that of modern-day fighter jets (An F-22 Raptor’s top speed is 2,410 km/h) when flying on planets with an atmosphere. Space flight would be considerably faster, without the friction or drag created by atmosphere.