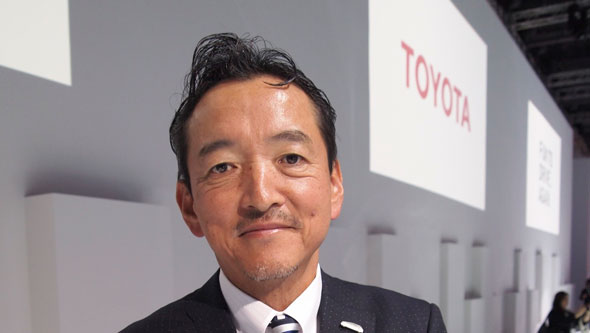 61-year old Tokuo Fukuichi doesn’t look his age, despite having a lot on his plate. As global head of Lexus design (as well as sister brand Toyota) he’s responsible for the look of about eight million new production cars each year (as well as one-off concepts), but in person he comes across as fresh-faced and relaxed and dresses in a refreshingly non-corporate way, all flamboyant ties and suits, and with a foppish new haircut at our latest meeting.

The Lexus part of his job might be the smaller one compared to Toyota in pure number terms, but it’s been using up a lot of his creative juices. After almost 40 years within the Toyota Motor Corporation behind designs like the cool first-generation Previa and Alphard large MPVs, plus the chunky Tundra US pick-up, he got the top design job in April 2011 and went straight to work by heavily influencing the direction of the stunning 2012 Lexus LF-LC concept.

Right now he’s concerned about building on Lexus’s bold new design identity and making it stand out more from rivals. “We have to think about the difference between Lexus and other premium brands”, he says. “Other [German] brands seem more complex and clinical but I want to go in the direction of ‘intriguing’ and ‘simplicity’. Proportions must change too.”

The way he talks about his design philosophy is intriguing too. He moves from football analogies one moment – “bad design teams can be like very young footballers, every person surrounding the ball but not looking elsewhere. From defender to attack each one must keep their position. We might have 20 ideas but they’re sometimes all the same!” –  to cooking ones the next: “I think a combination of factors makes things better than before. Tarako (fish egg) spaghetti is a good example: the Tarako from Japan and the spaghetti from Italy combine to make a better taste than each ingredient by itself.”

Food and football might help explain his design thinking but, perhaps thankfully, they don’t influence his actual designs. He cites Italian car design heavyweights Giugiaro and Pininfarina as two specific important influences, but also the wider sphere of fashion too, concluding, equally as enigmatically: “Beautiful ladies and handsome guys – you look at them to try to understand why they are beautiful or handsome. It could be their eye colour, or because of their longer legs and a shorter body. It’s all about good proportions.”