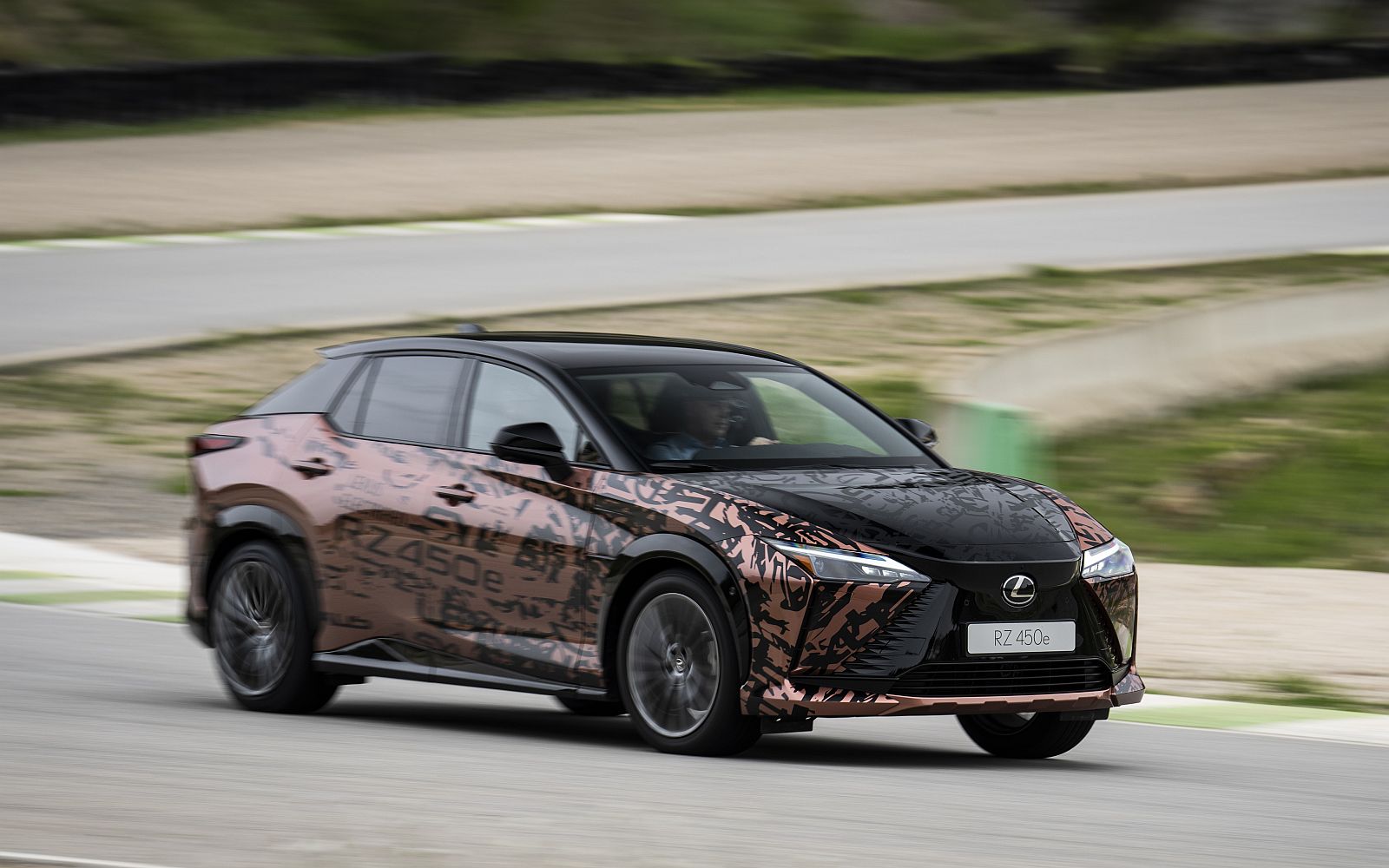 Selected members of the national motoring press were recently invited to test-drive pre-production prototype versions of our highly anticipated Lexus RZ – the first Lexus electric vehicle to be developed from the ground up. The professional testers were given the opportunity to sample the new mid-size SUV with both a traditional steering set-up and our world-first steer-by-wire system with a steering yoke. What were their Lexus RZ reviews?

Below is a selection of excerpts from recently published Lexus RZ reviews. To read the full online reports, click on the emboldened links.

Click here to keep informed about the Lexus RZ

“Before [it] even turns a wheel, you’ll notice that… you’re confronted with an aircraft-style yoke, a design chosen because steer-by-wire can virtually alter the rack ratio from very high to very low and almost anything in between. As a result, there’s only 150 degrees of steering movement from lock to lock, meaning there’s never any need to take your hands off the quarter-to-three position.

“The RZ is a firm signal of zero-emissions intent”

“Out on the circuit, the system feels remarkably natural. The RZ feels planted and poised, the rear electric rear motor even helping to tighten your line on exit under throttle thanks to the ability to deliver 80% of the overall torque when cornering. It feels refined too, the whine of the motors being well suppressed, plus road and wind noise are muted. And what bumps there were, it rode with decent compliance. It’s also roomy inside. In terms of its external dimensions, the RZ falls between the mid-size NX and RX in the brand’s SUV pecking order, but with a longer wheelbase than the latter, it serves up more room to stretch out.”

“This mid-size SUV is based on the firm’s e-TNGA architecture for electric vehicles [and] integrates the same 71.4kWh battery into its floor for a predicted range of more than 250 miles from a full charge. From launch there will be no two-wheel drive RZ, so this 450e denotes a dual-motor set-up… for a total combined output of 309bhp. This type of tech is fairly conventional, but the RZ is wading into battle against all-electric rivals… with a potentially game-changing system.

“If fitted with Lexus’s One Motion Grip set-up, the car comes with steer-by-wire technology, meaning there is no physical connection between the steering wheel and the road wheels. The weight of the set-up was surprisingly heavy and felt meatier than the standard steering in the RZ. Response to your inputs is good and after a few corners it becomes relatively natural as the system is intuitive to use. At low speed is where the tech really shows its worth, allowing you to change direction rapidly with little input at the wheel, making the car surprisingly manoeuvrable.”

“Designed as a butterfly-shaped control, the yoke offers 150-degrees of movement to lock, with everything on the wheel – including the indicators – moving with your hands. The space-saving above and below the driver’s hands means the cockpit dials are higher, easier to see and not interrupted by the rest of the wheel. Steering this way has two benefits; firstly, it prevents  unwanted vibrations and information from the road surface coming through the wheel and unsettling the driver. [Secondly,] steer-by-wire means engineers can tune the steering response depending on the speed: higher speeds dull response, while lower speeds give you more control.

“In many ways it matches the way you apply power when driving an EV. Efficient steering matches smooth throttle inputs, and after a few laps threading the RZ450e through the circuit is pretty relaxing. In contrast, using the conventional wheel is busy, and ultimately means I’m carrying less speed through corners. That… could be relevant when Lexus drops this system into sports cars.”

“The benefits of [One Motion Grip], according to Lexus, is that it requires much smaller inputs than a normal wheel. A 150-degree turn left or right is enough to move the wheels from straight to full-lock – meaning manoeuvres can be executed without crossing your arms or removing your hands from the wheel. It’s at low speeds where this set-up brings the greatest benefits. Small inputs result in quick changes of direction, making the car feel particularly agile. After only a few corners the yoke felt natural though, and the system is surprisingly intuitive to use.

“Practicality is a strong point, with loads of space inside for taller passengers to get comfortable”

“While the yoke is clearly the centrepiece for the Lexus RZ’s beautifully appointed interior, it’s pleasing to see the brand transferring the vastly improved infotainment system over from the latest NX hybrid SUV. That means you get a large 14-inch central touchscreen with Apple CarPlay and Android Auto connectivity, plus a cloud-based sat-nav and a new ‘Hey Lexus’ voice control. The RZ is also capable of receiving over-the-air updates. Even as a pre-production car the Lexus RZ 450e was incredibly quiet on the move – even at higher speeds. It’s a quality that is complimented nicely by the largely supple ride.

“[The RZ is] a new electric SUV that’s broadly similar in size to the current hybrid and plug-in hybrid Lexus NX. The RZ isn’t a replacement for that model: it’s a complement, as part of a new line of electric-only Lexus models. Styling-wise, the RZ 450e follows many of the traditional Lexus cues, albeit with the spindle grille reimagined as sculpted bodywork elements (because, you know, it’s an EV and doesn’t need a grille). There’s a neat split rear wing element on the back, too, which adds some welcome visual flair.

“According to chief engineer Takashi Watanabe, the brief wasn’t to make an electric Lexus – but to use electric technology to make a better Lexus. At speed out on a race circuit the steer-by-wire car felt remarkably composed and, arguably, more planted and confidence-inspiring than the RZ 450e with the standard steering. There was reasonable feedback too, despite it being entirely artificially generated by that motor.”

“For this first drive, we had the chance to sample a pair of RZ 450e prototypes on a race track and a short traffic cone handling course. One car featured a traditional wheel, and the other the new steer-by-wire system. Sure enough, the RZ 450e feels properly brisk, even though Lexus has clearly focused on delivering smooth acceleration. The suspension balances the weight of the car well in the corners… [and] the four-wheel drive system… automatically adjusts the power distribution between the front and rear wheels as required, which helps to enhance traction. That said, the focus of the engineers appears to have been more on delivering composure and comfort.

“It’s clearly set to be a credible contender, one that offers some key differences and technology to its rivals”

“To the big question then: what’s that steer-by-wire system like? At higher speeds, there’s a natural weighting to the yoke that actually inspires more confidence than the traditional steering set-up that you can get in the RZ 450e. There’s even reasonable feedback, even though it’s entirely artificially generated. As for the tight handling course, here turns that would require a lot of wheel twirling in the conventional car were a breeze in the steer-by-wire version. The system definitely feels well-suited to the RZ 450e.”

Read more: Answering your questions about the Lexus RZ