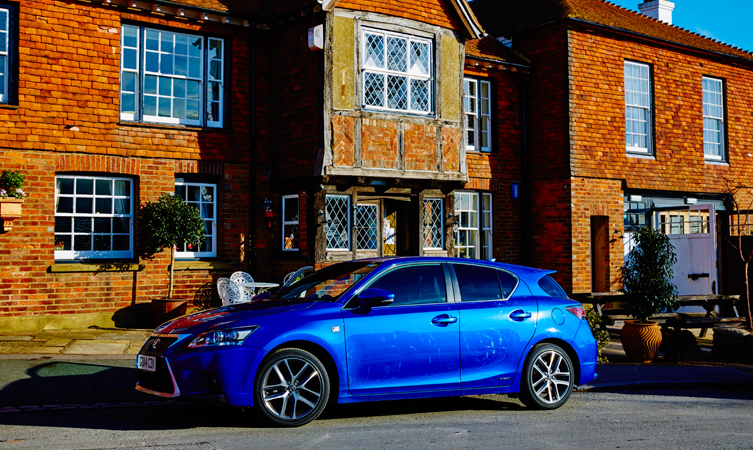 As we continue our tour of amazing UK hotels, we take the Lexus CT to a couple of the best weekend retreats in the south.

When did it become acceptable to stay in the pub all weekend? When it’s The Bell in Ticehurst, who cares what anyone thinks? This eccentric establishment has long been at the forefront of destination boozers in the south and if you like a tipple after a long drive, head into the beautiful East Sussex countryside to pull up a pew by the fire and prepare for a weekend of laughs and unexpected luxuries.

The building
What seems to be like another well-kept high street pub holds plenty of surprises when you step through the door. Not only is The Bell in Ticehurst a real centre of the community, it’s a favourite with out-of-towners and always has a buzz about it.

The bar and dining area are in one long room, with eclectic chairs and a pillar made of books, sewing machine tables and tassled fez lampshades. And as for the men’s room – who knew French horns could be put to such use?

The rooms
No matter what you go for, from a compact double in the main building to the luxury lodges or Love Nest in the grounds, you will be in for a treat. For a start most of the rooms have silver birch trees growing in them which is not something you see every day. Every space is unique and has a host of different quirks, anything from a bright yellow 70s phone to a shiny copper bath tub, a tailor’s dummy to a cosy wood burner. Turn your key in the door and be prepared.

The food
When you check in to your room, you’ll find scones, jam and clotted cream under a bell jar and that sets the pace for a weekend of indulgence. If you want pinkies-out fine dining, then this may not be the place for you. What The Bell does supply, though, is gastro pub fare at its best, the kind of menu that looks more and more amazing with every sip of your pint.

Home roasted loin of pork with apple mash, devilled lamb’s kidneys, a fish supper featuring the best chips we’ve sampled this year. Local produce is used where possible and as expected, the wine list is wide-ranging and ales are local.

The activities
If you’re booked into a lodge room, it’ll be tempting to crash in front of your personal outdoor fireplace with the papers but we say, a Sunday stroll around Bodiam Castle or Pashley Manor could well set you up for a stupendous Sunday lunch back at The Bell.

The verdict
A luxurious treat but also a true English eccentric that will make you smile all weekend.

Ramsgate has seen an upturn in interest from weekenders looking for an old-fashioned seaside escape and Albion House is playing its own part in the rejuvenation of this part of the Kent coast.

Like its near neighbour Margate, the town can be an odd mix of the down-at-heel and uber-trendy but Albion House is bringing a touch of the deluxe to an area that’s definitely on the up. Just an hour and a half from London, this is a trailblazing hotel that will attract – and welcome back – city weekenders.

The building
Albion House was built in 1790 as a holiday retreat and was host to a young Princess Victoria and family in 1835. As home to Ramsgate Town Council it then fell into disrepair before its Regency grandeur was beautifully restored over the last few years.

From its majestic position on the cliff above the town, the view is of the Royal Harbour and sea beyond. (So of course, that means sunsets are to be enjoyed from your room with a glass of fizz.) If you’re feeling more sociable, the airy Town Bar has squashy sofas and armchairs and some fantastic cocktails.
The rooms Twelve of Albion House’s fourteen rooms have a stupendous sea view with the pick of them all being the Drawing Room Suite on the first floor.

In tones of cream and gold, its floor to ceiling French doors open out onto a wrap-round balcony where you can drink in that sea air before cosying up in front of its open fire. Throughout the hotel, Italian marble bathrooms are super-indulgent and the organic cashmere-lined beds are pretty heavenly.

The food
With dark walls, white linens and firelight, this is a special place to dine. Lime and jerk spiced sea bass, Harissa rump of lamb or mushroom risotto with Kentish blue cheese are all tempting, as is a wine list that features organic wines that are rumoured to be practically hangover-free.

If afternoon tea appeals, Albion House does it in style, with guests helping themselves from a table groaning with scones, brownies, Victoria sponge and sandwiches.

The activities
Take a fascinating tour underground at Ramsgate Tunnels and see where people were up to 60,000 people sheltered during the war. Then take a walk along the golden beach at Ramsgate Main Sands, or whizz out to sea to take a powerboat tour of an offshore windfarm or go seal-spotting with Horizon Sea Safaris.

The verdict
A blast of fresh air for Ramsgate, Albion House is a seaside trailblazer in many ways.