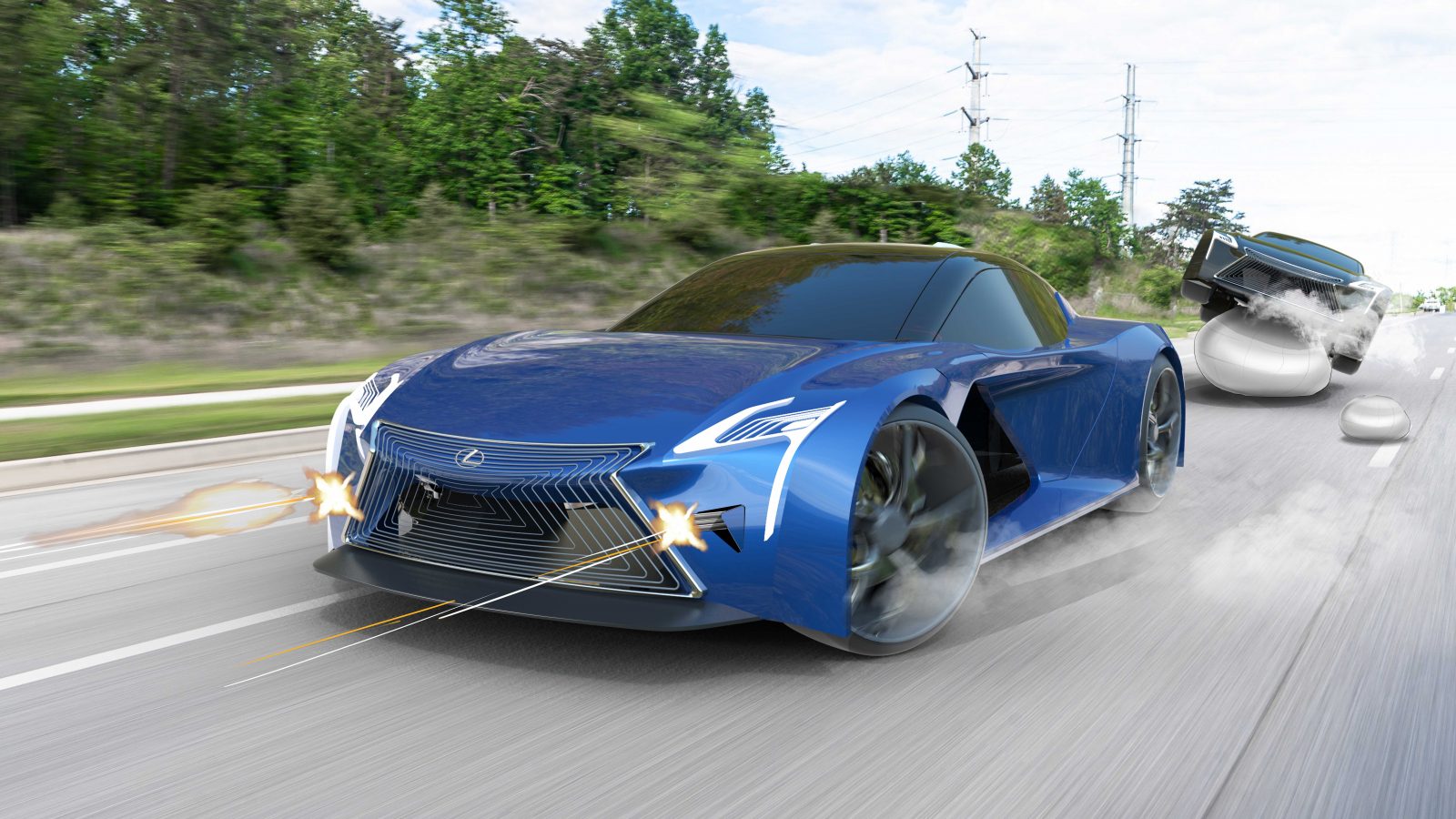 James Bond is most famous for driving Aston Martins and Lotuses, but can you ever imagine the world-famous superspy driving a Lexus? Recently, Autocar challenged postgraduate students on Coventry University’s renowned automotive and transport design course to imagine what a Bond car might look like in ten years’ time.

Amongst the entries was Francis John’s Lexus SF (Superfast), an all-electric, new-era Lexus supercar, which houses a permanent-magnet electric motor that produces 1,200bhp. Its power source comes from a rapid charging solid state battery, good for a range of 600 miles. Intrigued, we caught up with Francis to find out more…

What made you choose Lexus for your Bond car?

My favourite Bond car is the Toyota 2000GT fromYou Only Live Twice, and that became my main inspiration. As well as being part of the Toyota family, Lexus is famed for its luxury and performance – like many other cars Bond has driven in the past. I also believe it is a brand that would suit Bond himself as a character, representing creativity, sophistication, perfection and modernity.

Which Lexus cars was the Superfast inspired by?

The Lexus LC 500 and the LF-LC Concept heavily influenced the design. The LC has a beautiful shape – the sweeping roofline tapers rearwards, as if the whole car is in continuous motion. I tried to incorporate many of the car’s sharp lines into the Superfast, especially on the bonnet, and the rear of the SF is very much sculpted like the LC’s. I love the fact that the chrome-plated mouldings that run alongside the roof are shaped to echo the lines of a traditional Japanese sword, it’s a great reference to Japanese culture.

Is your Lexus Bond car concept heavily inspired by Japanese culture, then?

Yes, I really admire the way that technology coexists with nature in Japan, which is why I chose Kyoto for the fictional location. The city, famous for its cherry blossom, is a mixture of modern high rises and more traditional buildings. I am also really interested in historic Japanese warriors, such as Samurai and Shogun, and their history. For me, Lexus design is the embodiment of Japan. I think the design language flows beautifully, everything has a purpose and there’s nothing out of place. It’s almost like what the designers do is innate.

You describe the SF’s styling as having ‘futurised’ Lexus design cues. What do you mean by that?

I aimed to create a unique form, but still wanted the Superfast to be recognisable as a Lexus. Also, the brief was for a Bond car in 2030, so it couldn’t look too futuristic. That’s one reason why I included the spindle grille at the front because the lines on all Lexus cars tend to flow from that point. It’s a ‘floating’ grille of course, as because it’s an electric car it doesn’t need one.

The headlights, which were probably one of the most challenging things to create, were inspired by the UX Concept, while the rear LEDs are a development of the LC’s, taking the horizon line concept of the newer SUVs and applying that in a futuristic way. Ultimately, I wanted it to be a smooth, simple, and powerful design, with that single line flowing from the front to the back.

There are also a few design elements that we haven’t yet seen on a Lexus vehicle, such as the big cut-outs underneath the doors for the venturi tunnel, which uses the air to push the car onto the road, as well as the front splitters at both the front and the rear.

What design methods did you use you create your Lexus Bond car?

I start out by putting pencil to paper and sketching. I sketch a lot because it’s the easiest and quickest way to convey your thoughts. There are no limits when you sketch, and you are free to do anything that you want. I then take a photo of my favourite sketch and then put it into Photoshop, where I start to design the different elements. There were quite a few versions, so I went back and forth between sketching and photoshop as I refined the design. It’s quite a lengthy process, but very rewarding.

I used a process called generative design for the wheels, which involves using a computer programme to generate a certain output within set constraints. It creates the optimal, minimalistic design.

It can’t be a Bond car without gadgets – how will the Lexus defeat the bad guys?

At the front, it has a pair of laser-guided gatling guns, which were inspired by the classic DB5 from Goldfinger. It can also drop pneumatic air canisters which are similar in size to golf balls out of a compartment at the rear. The canisters can expand to several times their original size to either create an instant roadblock or exploding underneath pursuers and launching them into the air. The sealed and isolated cabin is protected by a Sentinel system, which shields the driver from everything from bullets to biochemical exposure.

Why did you decide to make the Lexus SF electric?

While I love the exhaust notes of the LC and LFA, I wanted the Lexus SF to be a little bit more subtle. Bond is famous for being high-tech, and that’s why I chose a solid state battery to power the car. By 2030 solid state batteries will still be quite rare. They are capable of producing a lot of power in a relatively compact space which helped me to keep the dimensions of the car to a minimum.

Thanks so much for your time Francis, and we wish you the best of luck in your future design career.