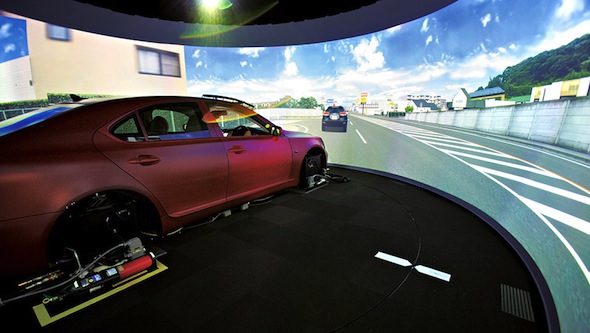 The driver in front of you jams on his brakes, or a car swerves in front of you, and you need to hit your brakes to avoid a collision. It’s the kind of situation where small improvements in a vehicle’s safety features can make a big difference, so it’s a scenario that safety engineers like to study in detail. But how do you observe ordinary drivers reacting to dangerous situations, without actually putting them in danger? If you’re Lexus, you build a sophisticated, state-of-the-art, virtual-reality simulator, where you can observe real drivers and measure their reactions to the millisecond.

Welcome to the Driving Simulator at Lexus Headquarters in Japan.

Takashi Yonekawa, an engineer who helped design the Driving Simulator from the ground up, explains: “The driver, the vehicle, and the traffic environment— these are the three key elements of driving safety.” The Driving Simulator brings those elements together in a controlled environment, where every variable can be tested and measured.

The simulator includes a sophisticated dome, around seven meters in diameter. Inside the dome sits a Lexus LS. The dome’s interior is covered in white wrap-around screens, and during simulation tests the screens display highly realistic projected images of city and highway driving. While the visuals are quite convincing just on their own, the simulation works on the other senses too. The entire dome is supported by massive cylinders that move, tilt and rotate, simulating turning, climbing, acceleration and deceleration. Audio recordings of engine noise, vibration and wind complete the effect, and it all comes together as an immersive, virtual-reality experience for the test driver.

Eight projectors show seamless images onto screens that wrap 360 degrees around the inner surface. The realism of the virtual driving experience was evident during recent tests that simulated extremely monotonous driving situations, where drivers are prone to become drowsy and fall asleep.

The goal is to detect changes in a driver’s behavior when this happens, in order to help develop a warning system. Some of the test drivers showed signs of drowsiness within a mere five minutes of beginning the simulated drive.

Another recent test measured drivers’ reactions to a rear-end collision warning. This is a passive safety feature that warns of an imminent collision, such as when the vehicle in front brakes suddenly. One hundred drivers participated in this test of reaction times—they were asked to intentionally take their eyes off the road, and then hit the brakes when they heard the rear-end collision warning.

Takahiko Murano, in charge of designing the tests used in the Driving Simulator, explains, “This is the sort of test that would be impossible to perform in the real world. The data that can be gathered in the simulator are very useful in helping to understand how drivers react to dangerous situations.”

Thousands of test drivers have come here and sat in the simulator’s test Lexus, taking part in a wide range of tests of new or improved safety features. They’re ordinary people, ranging in age from their twenties to their sixties. Some of them drive every day; others drive only occasionally. Mr. Murano observes that “people drive in all different ways, but our goal is to keep them all safe.” And the best way to do that is by studying real drivers, and learning how they really drive.

This story was first published in Beyond by Lexus magazine.