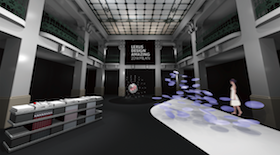 Milan Design Week begins today, and Lexus is playing host to an exhibition of three new works created by world-renowned designers in response to the ‘Amazing in Motion’ brand ethos.

The first of the works is by Italian designer Fabio Novembre, and is entitled ‘We Dance’. It consists of a mirrored sphere surrounded by shards of pointed glass. Inside the sphere is an entity that represents the begining of life, while the shards of glass orbiting the central sphere are evocative of the solar system.

Japanese designer Nao Tamura’s ‘Interconnection’ explores mankind’s independent relationship with nature. It is made up of purple petal-like pieces that hang from the ceiling on threads; each individual element moves in response to the natural flow of air as visitors pass the fixture. Internationally renowned, Tamura has been awarded a plethora of prestigious design honours including the IF Product Design Award, Red Dot Award, Industrial Design Excellence Award, and Milano Salone Satellite Award.

‘Transform’ by The Tangible Media Group in the USA and led by Professor Hiroshi Ishii from MIT Media Lab, is the final exhibition piece from the trio of world-class designers exhibiting for Lexus at Milan Design Week.

The work comprises three dynamic displays that move more than one thousand pins up and down to transform the tabletop upon which it rests. The kinetic energy of the viewers, captured by a sensor, drives the wave motion represented by the dynamic pins. This piece is unique in evoking what is under the skin of a Lexus, namely Lexus Hybrid Drive, in which kinetic energy usually lost during braking is recaptured, and used to charge the battery.

The venue also showcases the 12 winning works from the second Lexus Design Award, an international competition that aspires to nurture and support a new generation of designers from around the world. The central theme for 2014 is ‘curiosity’.

Among the winning works on display at the exhibition are two emerging British designers; James Fox and Joe Hardy. Fox impressed with his den-building kit, designed to help people to use the environment to build their creative ideas. Meanwhile, Hardy’s interactive screen of rotating wooden cubes was popular with the expert judging panel.