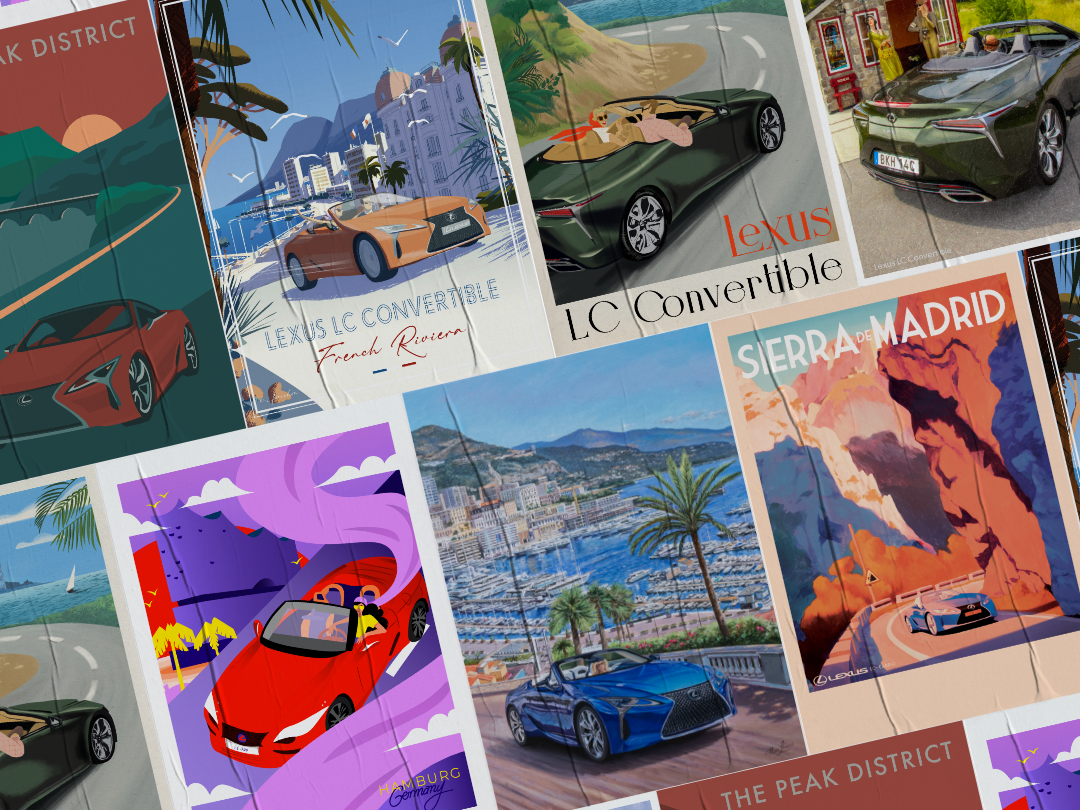 An idyllic scene of a Lexus LC Convertible being driven with its roof down along the Black Sea shore has captured the public’s imagination. The scene of the road to the city of Batumi has won the popular vote among a collection of vintage-style Lexus posters created to evoke the golden age of motoring.

The artworks were commissioned from seven artists and designers in different European countries with a brief to capture the driving pleasures and beautiful design of the open-top LC. These were displayed on Lexus’s social media channels during the past month, where people could vote for their favourites, prompting a close contest for the top honour.

In total, 3,459 votes were cast with top three placings taken by Georgia, then Spain, with David de la Heras’s view of the Sierra de Madrid, and then France, with Matthieu Forichon depicting the LC Convertible amid the scenery of the French Riviera.

A prize draw will now select 10 lucky winners at random from among those who voted for the Georgian entry, each of whom will receive a framed print of the poster and some Lexus give-aways (winners will be notified by email).

Nino Gordeladze, is the Executive Creative Director of the Windfor’s agency in the Georgian capital, Tbilisi, which created the winning poster. He described the design: “The start of an unforgettable summer adventure is around the corner – the sensation of freedom elevated with style and charisma, and in this case, the gorgeous city of Batumi stands waiting on the horizon, offering a rollercoaster of sweet summer fun.”

With the post-lockdown return to the roads and increase in self-drive holidays, Lexus celebrated the grand touring tradition and gave it a modern twist with a series of travel posters specially commissioned from European artists, featuring the eye-catching LC Convertible as their centrepiece.

Each designer produced an artwork featuring the LC Convertible in a popular touring location, inspired by vintage travel posters. The artists used a variety of different styles and materials, and their designs complement and highlight the smooth lines and distinctive styling of the Lexus LC Convertible.

A public vote to find out which is the most popular poster was held here: Lexus LC Convertible travel posters European vote, and on Lexus social media channels across Europe, from 23 August to 5 September. There was also the option for voters to sign up to be entered into a prize draw to win one of 10 framed prints of the winning poster, as well as a selection of Lexus goodies.

Rebecca Pymar is an illustrator from Norwich with a passion for colour and form. She chose the Peak District, and more specifically a section of Snake Pass, as the location for her poster as it felt like a natural choice. She comments: “It is renowned by drivers as one of the UK’s most enjoyable and breath-taking sections of road. It twists and turns, meandering through the hills and across the reservoir, with the sun bouncing off surrounding hills.

“Vintage travel poster art has forever been an inspiration for me and my work; it harks back to the golden era of transport, holidays and adventure. I love to capture some of those feelings today in a modern and contemporary style; my hope is to evoke nostalgic memories for myself and others.”

She adds: “The Lexus LC Convertible inspired the colours and feel of this piece – dusky reds and yellow, like a balmy summer evening. The car itself has a distinctive form, each feature seamlessly blending into the next. It is both elegant and bold and really sets off the dramatic backdrop of the peaks. Its curves mirror the lines of the road and surrounding landscape, and the vanishing points of the road align with the car to make it flow and have a sense of movement within the picture.”

Matthieu Forichon is an artist who demonstrates the French art de vivre. He has embraced the new possibilities opened by digital tools in creating a personal style in which precise outlines create harmony, demonstrating reality through elegance.

Forichon comments: “I wanted to add the highlights of vintage automobile illustration, especially in France. That means representing the French Riviera with its characteristic features: palms trees, pines, palaces (here the Negresco for inspiration), the Croisette and hills in the background.”

He uses golden colours and leaves the observer wondering whether the scene occurs in the early morning or at the end of the day and whether the lovers are arriving or leaving the palace.

A team at Windfor’s Tbilisi agency lead by Executive Creative Director Nino Gordeladze created the vintage style poster of the Lexus LC Convertible rounding a corner to reveal the city of Batumi – the second largest city in Georgia, located in the south west of the country on the Black Sea.

Gordeladze describes the design: “The start of an unforgettable summer adventure is around the corner – the sensation of freedom elevated with style and charisma, and in this case, the gorgeous city of Batumi stands waiting in the horizon, offering the rollercoaster of sweet summer fun.”

Hamburg-based illustrator Danii Pollehn creates themes and images in her artwork that celebrate the natural world and the female form. She works across all media, creating paintings, digital illustrations and pattern designs.

Pollehn’s poster features the Lexus LC Convertible in Volcano Red with a modern woman enjoying driving the convertible and feeling the wind in her face. The background shows a sunset, Hamburg’s Elbphilharmonie concert hall and part of Park Fictions, a kind of art installation which is a well-known and popular spot in the city’s St. Pauli district.

Marc Lamers’ versatile style means he can paint in both an impressionist or more classical, detailed style. His oil on canvas poster features the Lexus LC Convertible Regatta Limited Edition against the stunning backdrop of Monaco, which has been the playground of the rich and famous for decades.

Lamers comments: “The sensationally beautiful Côte d’Azur fits perfectly with the equally sensational Lexus LC Convertible. Both the environment and the car itself convey an impression of luxury. The white aniline leather of the interior fits seamlessly with the white colour of the luxury yachts that can be seen in the highly detailed background.”

The LC Convertible featured in Lamers’ poster is in Structural Blue body paint, whose microparticles reflect the light in a way that emphasises the lines of the car.

David de la Heras is a Basque illustrator and artist, born in Bilbao and now living in Barcelona. His work is characterised by a wide chromatic range and the combination of a classic pictorial style with contemporary graphic resources.

De la Heras chose the location because “it contains an emotional baggage for me…The Sierra of Madrid is where I used to escape for a while to disconnect.”

In Sweden, Hans Christiansen is well known for his pictures in national media. He has written and illustrated several books on nature, cars and his meetings with people during his world travels.

The moment captured in this vintage poster creates an interesting contrast between the nostalgic and the modern, highlighting the Lexus LC Convertible’s timeless design.

The small building in the poster is a bus shelter in Älvnäs, Stockholm, inspired by the railway station in Goathland on the North Yorkshire Moors, a location that has been featured in numerous TV programmes and films, including the Harry Potter series.