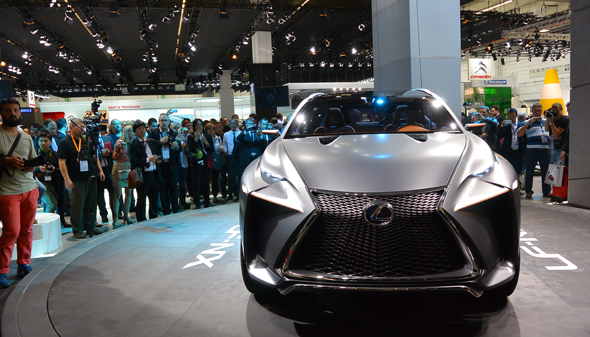 The Lexus LF-NX concept car has made its debut at the 2013 Frankfurt Motor Show.

The mid-sized crossover model is smaller than the full sized RX SUV and is designed to make a bold statement about Lexus’s design direction, and its hybrid technology leadership.

Revealing the car, Lexus Europe boss Paul van der Burgh said that the concept continued Lexus’ association with the crossover market, which it created in 1998 with the introduction of the Lexus RX.

“In 1998 we created the premium Crossover segment with the introduction of RX. Today, RX is our biggest seller worldwide, so it’s only natural for us to explore new opportunities in the segment below RX, which is expected to grow significantly in the next decade.

“LF-NX explores design possibilities for such a future crossover. It is youthful, confident and it is innovative, and it features a bold new look that gives us a sneak peak into how Lexus design will evolve.”

The dramatic lines of the bodywork represents the very latest interpretation of the now well established L-finesse design language that has influenced the look of Lexus’s cars since 2003. Inside, there are further developments of this design philosophy. The cabin follows the “Human Oriented” element of Lexus’s L-finesse design, presenting a dashboard divided between an upper display zone and lower operation zone – a format perfected in successive generations of Lexus models.

Commenting on the car’s bold looks, van der Burgh added: “Lexus has a passion for design that goes beyond creating stylish vehicles.”

This enables intuitive interaction with the concept vehicle’s next generation technology, including touch-sensitive electrostatic switches and a new touchpad Remote Touch Interface design.

The concept’s status as a premium crossover is reinforced by carved metal surfacing around the interior, sophisticated blue instrument lighting and yellow and black leather upholstery with contrast stitching.

You can re-watch the Lexus presentation and the unveiling of the LF-NX concept in this post.