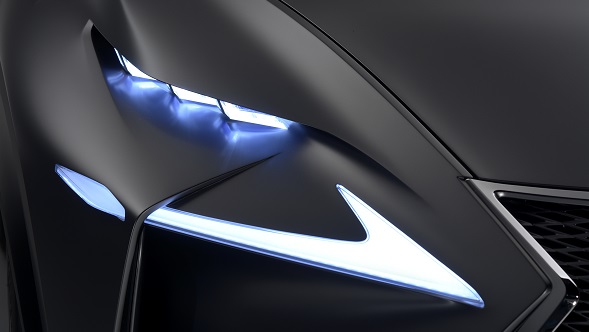 The new Lexus mid-size crossover concept, the LF-NX, made its world debut at the 2013 Frankfurt motor show today, and you can experience its chiseled lines from every angle – by watching our 360° video tour.

Sharply styled, the model represents a further evolution of Lexus’ ‘L-finesse’ design language – the influence of which can be seen across the current Lexus range.

At the front is Lexus’ familiar ‘spindle’ grille, alongside a signature headlamp arrangement and separately positioned LED daytime running lights – similar to those seen on the new Lexus IS.

Sculptured side flanks, flared wheel arches and a steeply raked tailgate combine to give a purposeful, coupe-like appearance in profile – L-shape lights dominate the rear of the car.

Watch the LF-NX concept tour below. Find out more about the unveiling of the car here.