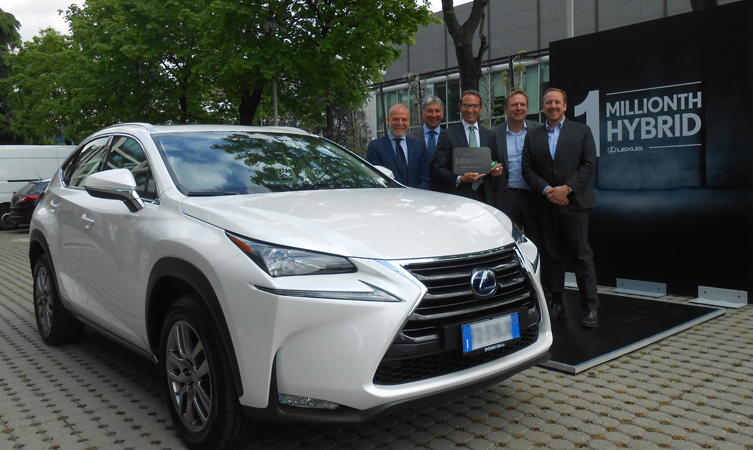 Lexus today marked the sale of its one millionth hybrid vehicle, just 11 years on from the launch of its pioneering RX 400h luxury SUV.

The landmark vehicle, an NX 300h, was handed over to Aldo Pirranello a first-time Lexus customer – in Milan, Italy, by Alain Uyttenhoven, Head of Lexus Europe.

Mr Pirranello said: “I chose this brand because I really value it. When I saw the new Lexus NX 300h, my interest was immediately captured by its design and of course the hybrid technology. I was surprised to hear that I was the buyer of the one millionth hybrid Lexus and I am honoured to help celebrate this important milestone for Lexus.”

Tokuo Fukuichi, President of Lexus International, said: “The hybrid powertrain continues to be our signature powertrain technology. We have set ambitious environmental goals for 2050 and the popularity of hybrid worldwide is extremely important for us in achieving these goals. I am extremely happy that more than one million new car customers have put their faith in our Lexus hybrid line-up.”

Lexus’s introduction of full hybrid power to the luxury car market in 2005 paved the way for every model in its range to feature the technology. The GS 450h arrived in 2006, followed by the LS 600h, the world’s most powerful hybrid saloon in 2007.

The HS 250h, a model not sold in Europe, was introduced in 2009 and two years later the CT 200h became the world’s first full hybrid premium compact model. The IS 300h and GS 300h were launched in 2013 and in 2014 the NX 300h took hybrid into the mid-size luxury crossover market for the first time.

Around the world, Lexus currently sells 10 hybrid models, the largest full hybrid line-up of any premium car brand. Europe is its largest market, with 64 per cent of all Lexus sales being hybrids in 2015; for western Europe the figure was 95 per cent.

I am extremely happy that more than one million new car customers have put their faith in our Lexus hybrid line-up – Tokuo Fukuichi, President of Lexus International

The UK is well-established as one of Lexus’s strongest European markets and from the introduction of the RX 400h here in 2005 up to the end of 2015, more  than 65,000 cars equipped with Lexus Hybrid Drive have been sold.

Alain Uyttenhoven said: “Our hybrid technology delivers not only great fuel efficiency and low CO2 emissions that lead to a low cost of ownership, it also provides a smooth, comfortable and engaging driving experience. So it doesn’t come as a surprise that it scores the highest satisfaction rates among our customers.”