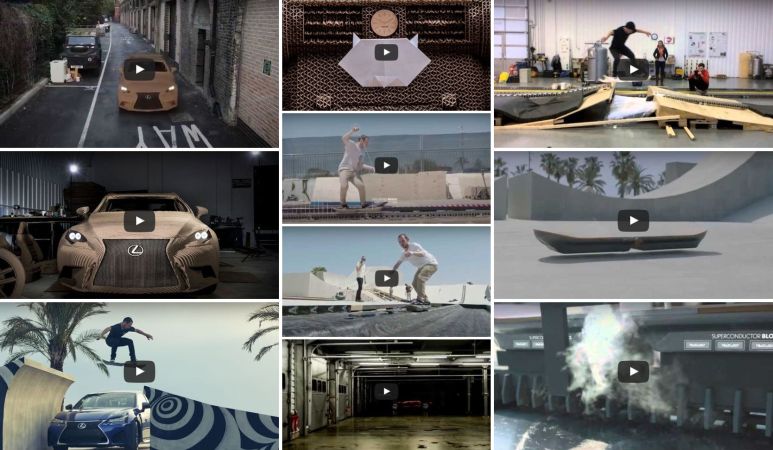 Our three-part commemoration of Lexus UK’s social media content during 2015 continues with a countdown of the ten most popular videos posted on our official YouTube channel this year. With thousands of subscribers and well over 10.5 million views, our online showcase contains a broad range of videos, from helpful tutorials and informative reviews to the revealing of innovative projects.

This year has seen a bumper crop of videos arrive on our channel, the ten most popular of which are charted below. Why not scroll down and watch each video in order. Can you guess which film scored the most views?

10. How to Fold an Origami Cat with Your Non-Dominant Hand

Launching our top ten videos of 2015 is a film that first appears to be a bit of fun but actually sheds some light on a serious challenge for Lexus craftsmen wanting to rise to the level of master artisan, or takumi. After honing their skills and accumulating at least 25 years of experience in their particular field of car-manufacturing, each candidate is assessed in a number of ways. One of which is to fold an origami cat in less than 90 seconds… but with one hand only, and your non-dominant one at that.

As evidence of just how big a deal the Lexus Hoverboard was in 2015, six of the videos in our top ten countdown come from this landmark project. This film took the viewer behind the scenes during a development process that took in excess of a year to complete. Its extended running time was used to pull together a number of elements, such as the material science involved and the evolution from a pebble-sized object to a fully fledged board with integral twin cryostats.

In this video, pro skater Ross ‘The Hoverboard Dude’ McGouran helped us understand an area of physics that most of us had never considered before when thinking about a hoverboard – the difficulties of frictionless riding. With no resistance from the ground and the rounded shape of the magnetic field to balance on, Ross described the riding experience as similar to a ’50-50 grind’ on a tubular rail, which, for those unfamiliar with skateboarder parlance, is a bit like balancing on a tightrope.

The best way of experiencing the 5.0-litre V8 fitted to the Lexus RC F is to get behind the wheel and drive it. However, we appreciate that not everybody will be able to do this. So for this top-ten video we set out to create the next best thing – hearing it in a new and dramatic way. The film is shot in a novel stop-motion style (each frame is a photo) but the all-important soundtrack was captured using a unique binaural recording technique to bring the roar of the engine to life. For the full surround sound effect, plug in a set of headphones and turn up the volume!

The third in our sextuplet of Lexus Hoverboard videos in the top ten takes us through the difficult testing phase of the project. This short film allowed us to watch the first cornering rides and the first air-to-air-to-air jump during development undertaken in a facility in Dresden, Germany. With a number of tumbles by experienced skaters battling to master the new riding technique, it also has the feel of a fail compilation.

At just 37 seconds long, this video is the shortest in our top ten but captured the world’s attention for daring to suggest that Lexus had achieved the seemingly impossible. Had the manufacturer transformed the science fiction predicted in Back to the Future Part II to real-world fact? This first release in the Lexus Hoverboard series (in itself the fourth project in our Amazing In Motion campaign) was purposely close-cropped and stopped just before the unrevealed rider actually put any weight on the board, leading some to question whether the hoverboard was indeed real.

With viewing figures almost double that of the video in fifth place, this is arguably the most fascinating of all the Lexus Hoverboard films. It reveals a good deal of the material science behind the project, through interviews with key members of the development team – magnetic levitation engineer Dietmar Berger and superconducting levitation pioneer Professor Ludwig Schultz. So if you would like to understand how the hoverboard is able to levitate and lock its position within the magnetic fields of the track, this is the video for you.

Moving into the top three videos, number three came out of left-field in more ways than one, boosting its viral appeal. News of its existence had been kept strictly under wraps, so its arrival was totally unexpected. Its construction was unique, for traditional materials such as sheet metal, glass and plastics were switched for precision-cut cardboard. Finally, the fact that the Lexus ‘Origami Car’ could move under its own power and had functioning doors, seats and headlights made it all the more remarkable. Perhaps the only downfall of this unusual Lexus IS is that it had an aversion to rain.

Published on the same day as the reveal video above and cross-linked to each other, this explanatory video had a particularly high click-through rate as viewers were intrigued to discover how it was possible to make a functioning and faithful, life-size replica of a Lexus IS saloon from a two-dimensional material like cardboard. As this video showed, it displayed a combination of technology and human craftsmanship that was a perfect and daring exploration in harmony with Lexus’s promise of Creating Amazing.

Revealed a short while ahead of the official Back to the Future day (parent company Toyota had its own grand plan for 21 October involving its fuel cell car), this official reveal of the Lexus Hoverboard in action on the world’s first hoverpark broke all records on the official Lexus UK YouTube channel and almost broke the Internet. It marked the culmination of 18 months of design and technology planning and weeks of testing.

Mark Templin, Executive Vice President of Lexus International, commented: “We set out to push the boundaries of technology, design and innovation to make the impossible possible, collaborating with partners who share our passion for creating enjoyment out of motion.

“As we combined our technology and expertise, we discovered that making a hoverboard isn’t an easy process. We’ve experienced highs and lows and have overcome a few challenges. But through mutual determination we have created a demonstration of our philosophy in design and technology to create Amazing In Motion.”

Why stop here? Watch the video below and use the links to click through and subscribe to the Lexus UK YouTube channel so you will never miss our next video.