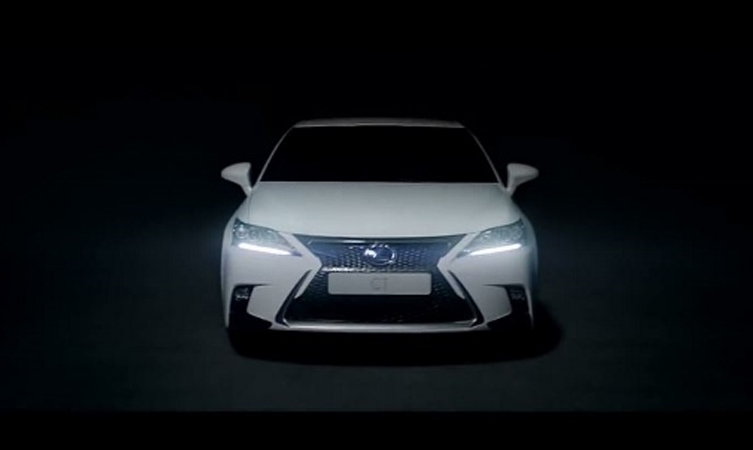 We take a look back over some of the most memorable Lexus adverts ever aired and explain elements of the engineering excellence that inspired them.

Initially launched in 2010, the CT 200h has received a significant overhaul for 2014, promising characteristic levels of luxury in a high quality, good-to-drive package.

The CT range benefits from a range of dynamic tweaks for 2014, including revised suspension and enhanced aerodynamics. Furthermore, the hybrid drive system’s transmission control has been remapped to allow a more linear build-up of engine revs.

All of these changes are brought to life by the advert’s pumping hip-hop soundtrack by Donnie Daydream featuring Richie Sosa. Entitled Dropzone, it is designed to represent the effect of the CT’s involving handling on the driver.

The ad closes with a voice-over, announcing that the new CT is ‘Amazing in Motion’. The voice is that of Oscar-nominated actor Chiwetel Ejiofor, perhaps best-known for his recent leading role in 12 Years a Slave.

Lexus burst onto the premium automotive scene in 1989, when the LS 400 luxury saloon made its debut at the Detroit Motor Show. The embodiment of obsessive engineering and craftsmanship, the model was known internally as ‘Circle F’ and was the work  of 60 designers, 1400 engineers split up into 24 teams, 2300 technicians and over 200 support workers.

Under the bonnet was a 4.0-litre V8 engine that is still regarded as an engineering masterpiece. The result of extensive testing, a total of 973 prototypes were put through their paces before the powerplant was deemed ready for production. For example, to ensure smooth running and supremely refined performance, engineers reduced normal machining tolerances by up to 50 per cent.

It was fitting then, that the television advert produced for the LS, and indeed the one that launched Lexus to the world, focused on efforts to make the model the smoothest luxury car of all time.

Entitled ‘Balance’, the advert sees an LS 400 accelerating on a rolling road, with 15 champagne glasses stacked on its bonnet.

As the car ascends through the powerband and on to 55mph, champagne is poured into the top glass, gradually filling the glasses below. The car continues to accelerate to 145mph, and because so few vibrations are transmitted into the car’s bonnet the glasses do not move, and not a sip of champagne is spilled.

The camera then pans to the front of the car, and a title card reads ‘Lexus: The relentless Pursuit of Perfection’, which remains a Lexus philosophy a quarter of a century later.

LS 460: The Pursuit of Perfection

The fourth-generation LS went on sale in the UK on January 8 2007 and was quickly hailed as an engineering masterpiece.

No major components were carried over from the previous generation LS 430, a factor that contributed to the model becoming the most expensive standard production project in Lexus history.

Powered by an all-new 4.6-litre V8 engine, the unit was the most technically advanced Lexus had ever built – producing 35 per cent more power and up to 30 per cent more torque than the outgoing unit. Despite this, fuel economy was improved and CO2 emissions were reduced.

In sharp contrast to the car’s extraordinarily complex engineering, the launch ad for the fourth-generation LS from Lexus Europe was extremely simple, featuring not one spoken word.

Instead, a series of evocative moving images, such as a prancing horse, a speed boat in motion, and a woman’s encounter with the Northern Lights, are overlaid with the familiar Lexus ‘The pursuit of’ suffix, with each image featuring a verb that signifies both the experience seen on screen, and the innate qualities of the car – control, performance, beauty, exhilaration and silence. The advertisement is set to an elegant and quietly haunting piano soundtrack, bestowing upon it an hypnotic beauty.

Acutely aware of the iconic status of the Balance ad, Lexus revisited the champagne glass theme in 2010 for the launch of the mighty V10 LFA supercar. Contrary to Balance, the aim of pitch was to break glass – that of a single flute placed behind the LFA’s instantly recognisable triple exhaust outlets.

The advert, filmed in a whitewashed studio, sought to highlight the LFA’s throaty exhaust note. The exhaust is amplified by separate, equal-length exhaust manifold runners that enhance torque through optimised back pressure to create the best possible sound quality.

The dual-stage rear silencer, constructed from titanium, uses harmonic management and incorporates a valve-actuated structure to either reduce or increase the sound from the exhaust. When the engine exceeds 3,000rpm, all of the sound-deadening chambers are by-passed, causing the exit route for the exhaust gases to straighten and the full engine roar to be unleashed.

To ensure that the LFA’s incredible sound would shatter the champagne flute, a physicist was employed to ascertain the type and thickness of glass used. Watch the advert above to see the result.

In 2013, Poise marked the arrival of a new era for Lexus – one comprising an increased focus on design and driving dynamics, and encapsulated by the Amazing in Motion philosophy.

The launch of Amazing in Motion in Europe coincided with the launch of the stunning new IS compact executive saloon. Featuring a jaw-dropping spindle grille at the front and a chassis of increased rigidity underneath; the IS represented a new kind of Lexus but one still underpinned by the same impeccable quality, refinement and reliability that is expected of Lexus cars.

To show-off the virtues of the new IS, Lexus called upon the English National Ballet’s principal dancer, Tamara Rojo, to capture its precision engineering through the medium of dance.

The advertisement sees Rojo’s ballet moves interspersed with shots of the new IS driving through a night-time cityscape, with each of her poses signifying the car’s strong bodyshell. Lexus achieved the additional body rigidity of the IS by employing new laser screw and adhesive bonding techniques, and carrying out additional spot welding.

The commercial is set to the original hip-hop song Step it Up, exclusively produced by Kozmeniuk, and is available to download on I-tunes.

For more information on our range of models, visit the Lexus UK website.