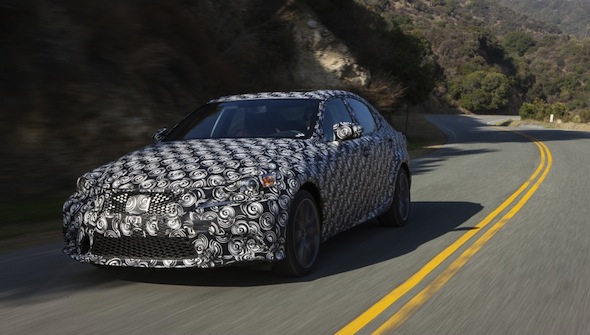 Lexus has announced that the next-generation Lexus IS will make its world debut at the 2013 North American International Auto Show.

The all-new saloon will be unveiled on Tuesday, January 15th and is inspired by the acclaimed LF-CC and features some design cues from the LFA supercar.

Journalists were invited to drive a prototype version of new IS at the LA Auto Show recently.

Autocar’s Hilton Holloway said: “On the short track course on which we drove it, the IS300h was swift and surprisingly capable, with good brakes and fine stability… On the road, the IS300h is refined and easygoing.”

US chatshow host and noted petrolhead Jay Leno has also taken the Lexus IS for a preview drive.