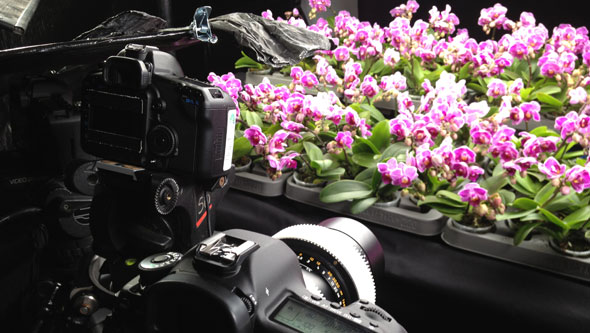 What’s more we needed the plants to flourish and flower. Not easy in a makeshift studio on the outskirts of London.

You can find out what happened in our short film, The Lexus LS Orchid Experience – which follows the story of the plants, over the three weeks it took to set up and shoot our feature.

The production of this beautiful film was not only complicated but also a technical challenge. Our story began with the expertise of Jim Durrant, owner of McBean’s Orchids who supplied us with over 300 flowers and a director, Rob Franklin who had filmed segments for BBC series Planet Earth and Life of Plants.

The plan was to use time lapse cameras to capture the orchids flowering inside one car while filming details on the other.  This meant constructing a makeshift studio at our press and training centre at Salfords, Surrey and turning it into a completely controllable environment.

With the studio setup, the complicated rigging was placed inside the car, (with great care as we were using the only two cars available in the country).  This was only made possible thanks to Rob’s experienced team of lightening experts and riggers.

Once production commenced the temperature outside dropped and the delicate orchids needed care and attention to make sure they were as happy as they could be, extra heaters and buckets of water were brought in to raise the temperature and humidity.

There was a hive of activity as the film crew shot the car and multiple time-lapse setups whirled autonomously, snapping 100s of pictures a day.

The next step was to take the car on location and in keeping with the films plant theme we decided upon Kew Gardens, arguably one of the world most famous botanical gardens.

The final part of the production was to wrap the time-lapse which had been filming for over two weeks and the huge numbers of photos taken were processed to form a video.

You can take a look at the results, here. And if you wanted to know more about growing orchids in a more conventional setting, below.

And if you wanted to know more about growing orchids in a more conventional setting, below.