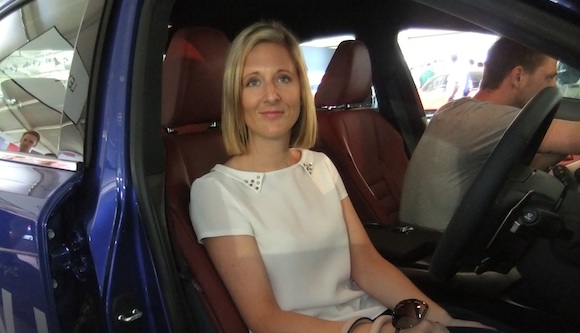 It’s finally here – the Goodwood Festival of Speed weekend has got off to a roaring start with today’s Moving Motor Show.

It’s the first chance for members of the public to take a close look at the new Lexus IS, and we’ve given 100 lucky people the chance to drive the car on a unique route that includes a trip up the famous 1.16-mile Goodwood hill climb course.

Read on to see their first impressions.

“I’ve never driven a hybrid before but the transfer of power between the engine and the battery was really smooth, so it’s very quiet when you’re cruising along but there’s a great performance sound when you put your foot down.

“The steering and feel of the car is nice and light but it does feel controlled and planted to the road. I love the mechanical dials and the little touches really make the IS different.” Alan Croston, Brighton

“My first impression was that [the IS 300h] felt very nippy. I live in Jersey, which is only 45 square miles and has a limit of 40mph, so the fact that it is a hybrid and can run on electric power alone means that the engine can shut itself off around one third of the time. I’ve test-driven quite a few new cars in the past six months to replace my Fiesta but this is definitely the best so far.” Siobhan Crick, Jersey

“I’m 6’3”, which can be an issue for me in some cars, but the IS was surprisingly spacious.  It’s responsive and drives really nicely and I thought it was really good overall. The quality, hybrid system and the ride quality were amazing.

“Going up the hill is brilliant, I’ve not been before but this is really something. I’m glad I got up early in the morning and booked myself in for a drive. I’ve been considering a Lexus so it was great to try the IS.” Brian Torrance, Ealing

“It feels really planted to the road and good around the corners, and the steering and brakes are responsive. The dash is really clear and the way the dials move is really smart.  I’m impressed!” Dale French, Bromley

“I really liked the IS, it’s comfortable and refined. I’ve never driven a hybrid before so it was interesting to see how it works – it’s really seamless changing between the battery power and the engine. If at some point I’m changing my car I’d definitely consider the IS.” Andy Murray

“It certainly feels like a driver’s car and offers a superb overall package. I’d never really looked at Lexus before because I’ve been tempted by the Toyota GT86, but it’s priced well and is economical, so I’ll definitely be considering it.” Reg Woods, Neath

“I’ve been looking for an economical car for my wife’s 100-mile daily commute, and this seems perfect. I nailed it off the line and it felt very responsive; the gearbox is smooth, the interior is quiet, and the car doesn’t roll much in corners. I’m also impressed with how much room there is in the back.” Shaun Cook, Southampton

“For me personally, I think I’d prefer the softer suspension of the SE model rather than the stiffer setup of the F Sport. Everything else was really nice about the car, from the interior to the seamless integration of the hybrid system.” Andrew Brodie, London

“I was attracted first of all by the car’s looks, then by the fact that it is a hybrid. I test-drove it to get own opinion on hybrid technology, and I have to say that if hybrid cars are getting like this then I would definitely think about buying one. It was also very comfortable for four people, has a great driving position, and is very well equipped.” Jeremy Harrison, East Sussex

Read more about the New IS here.