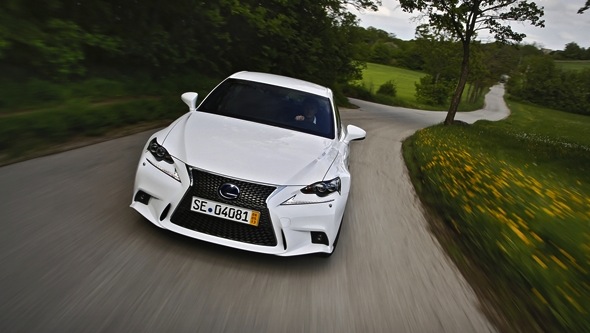 Naoki Kobayashi, deputy chief engineer of the Lexus IS, has worked for the brand for five years and before that worked for our sister brand Toyota.

We caught up with him at the car’s media launch to find out how it combines great design and engineering, why daring Lexus concept cars are here to stay and why challenging production processes made the car more fun to drive.

Lexus Blog: A lot of focus has been placed on driver satisfaction and great design with this new IS, particularly compared with previous Lexus models. Did the engineers work more closely with with the designers on this car than is normal?

Naoki Kobayashi: We always work closely together because design cannot be standalone. Everybody has to come on board to get a really good, well designed product, but it is true that there was a renewed focus on design with IS. It was good to take on some new challenges that this car presented.

We have the pop-up hood mechanism, for example. You can have a good-looking, low bonnet but the car must meet the safety requirements, so we needed to start with engineering to achieve good design.

The Daytime Running Lights are completely separate to the headlamp on this car, which is a new design element. Making this possible was quite a challenge for several teams, because it made the light and body design more complicated. But when we do achieve things like that, it’s good for us and for customers who have a great-looking car.

LB: This IS is visually very close to the LF-CC concept. Are other production models going to be closer to the concepts we see at motor shows in the future?

NK: It is difficult to say. A concept car is a message and statement to say that Lexus is going toward a more aggressive direction in terms of design. That’s one aspect of it.

The other useful thing with concepts is that we want to see the feedback we get from projecting an aggressive design. Positive feedback allows us to use design elements in successive projects. We’ve realised that there is not much value in being cautious with concepts, they must be challenging.

But equally, our production cars have to live up to the spirit of our concepts, even if they are not identical.

LB: The design of IS is much bolder than before; the same is also true for GS and other new Lexus models. How much focus is being placed on using design to attract new customers?

NK: There is a sense of urgency to our design efforts. It is certainly the case with the customer base who buy Lexus are at a higher age and we want to capture the younger customer as well.

We will do that by creating cars that are striking and relate to what a younger generation likes. A car needs to prompt a reaction, a second glance, and make people think “I’d like to drive that, that looks fun to drive”.

The same goes for an older buyer, though – we do not want them to buy our cars simply because they think “that’s comfortable, reliable, it’s something I’ve bought before”, as that is almost a passive reason for choosing a car. We want to have a car that really cries out to people.

What’s interesting is that when you pursue a distinctive design, you don’t want to betray customers and leave them thinking “it looked good, but the substance isn’t so great” – that’s the worst possible thing that we can hear as engineers. A good design creates a level of expectation of what you want in that vehicle and as engineers, we have to meet that.

LB: What is your favourite element of the design?

NK: I think the IS has a sense of flow, both in the lines and shape from the front of the car to the back, but also in the thematic flow around the overall design. It’s important that there’s a thematic flow – it’s not just a feature line or surface, the whole has to work together to say something.

First and foremost a car is something that moves, so it has to create a sense of movement, a kind of pent-up feeling that it is in motion even before it starts up. I think we’ve captured that.

NK: The 99g/km CO2 figure really surpassed our expectations, we worked incredibly hard to achieve a leading figure in the class.

We also worked a lot on body rigidity. The rigidity that we achieved was much more than what we’d expected to, so this was a real success – especially with the usage of the structural adhesive. We learned a lot from that exercise and now know that we can use this technology in the future.

LB: For this car, you took a new approach to development by making other executives drive a prototype to showcase new technology. How important is it to challenge the status quo?

NK: Contrary to what is popularly perceived, more automotive engineers in the world today know what they need to do to make a good car, without exception.

The best cars come out when all the engineers have diligently implemented what they know is best into the car, and it’s not seen that often because while engineers know what they have to do, these ‘have to do’ things can be quite labour-intensive and it takes a lot of work and convincing management to makes things sometimes.

I mentioned the use of body adhesive – this is something that some other manufacturers have been doing for ages but the Japanese manufacturers have been reluctant to introduce these new technologies because although they knew about it, it’s very expensive to make changes in production systems. What if the adhesive falls onto the floor, what if the nozzle gets stuck, what if this or that happens? These are all the factors that even though an engineer know this is best structure-wise, need to be explained and shown to bring benefits to the customer.

In the spirit of challenge, we involved top-level management and the president as well by saying “look, this is a really good technology, we really ought to try it out” so we gave them a chance to try it out. Mr Toyoda said it was really good, and luckily if he says it’s really good, then the production engineers say “OK”! That’s what allowed us to implement this new technology.

Akio Toyoda likes driving so it was good for us to play on that to make others understand what we wanted to achieve with the car. Challenging existing wisdom or process is very important for engineers.

LB: How much time did you personally spend driving the car during development?

NK: A lot! I was involved in all the dynamic and handling tests around the world over the past few years, including those at the Nürburgring and all of the race tracks and testing grounds in Japan. I sometimes felt that when I arrived my engineers would groan because I would always ask for a little more time with the car and provide more feedback – perhaps they would prefer me not to be there!

Every element needs to be approved from the selection of tyres to the homologation all sorts of other things, so there were lots of test drives. I was always there to provide feedback.

Within Lexus and Toyota, we have a group called the Z Division of chief engineers and even among the Z members the amount of test driving I did for this project far surpasses what the others have done. I’m very happy with the result.

LB: Did you drive the car so much because that is your specialism?

NK: I’m not sure, that is always a big focus for any engineer– but it is true, I started in chassis and suspension engineering and then I went on to handling and ride comfort.

I then moved onto the engineering the Auris and Corolla before I was involved in the not-realised Supra and some other special projects… but I have kept my plans in a drawer if another Supra is ever announced.

LB: The recent restructure within Lexus means that Akio Toyoda may be more involved with the brand than before. Have you seen evidence of this yet?

NK: President Ise is still very much in charge of Lexus but the organization has solidified. There hasn’t been much change to our daily work.