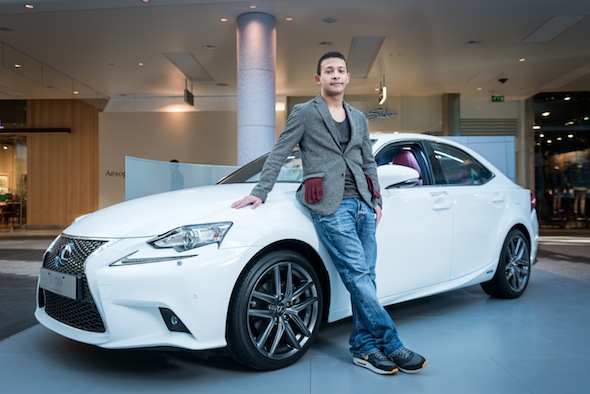 The new Lexus IS has been touring the UK’s shopping centres this year. Last weekend, the IS was joined by the CT 200h hatchback at Westfield, London. We spoke with shoppers at the centre to find out what they thought of the white IS 300h F Sport hybrid on display. 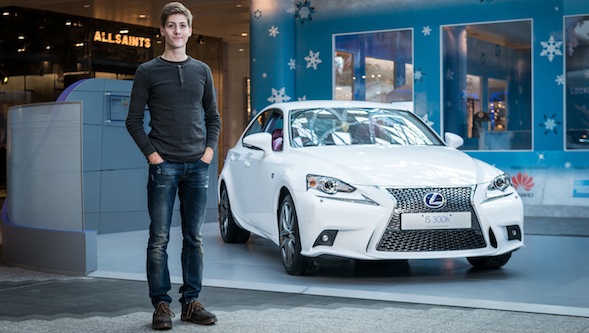 The driver-focused interior was a big draw for 19-year-old student Thomas Riffel who said: “The seats are low, I like the side bolsters and the touch screen. I like the centre console and the way it’s focused to the driver, and I like the gear shift paddles. Lexus cars always look sporty.” 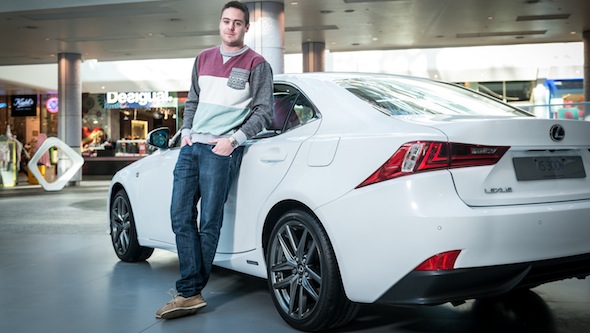 Managing director Gary Miller, 29, complemented the IS’ sharp lines, saying: “The styling is amazing, it looks wicked. I like the cabin, and the boot is a good size”. 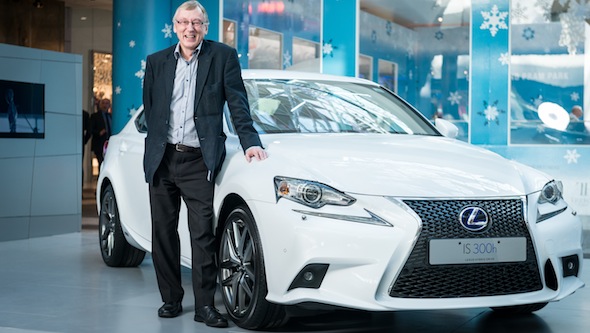 Two-time Lexus owner and management consultant, David Lewis, 63, spoke of the legendary reputation for quality and reliablity in Lexus cars, saying: “I’ve owned two first-generation IS 200s, they were really good. The thing that always struck me was that they were really reliable and cheap to maintain – they never break down.”

David was also impressed by the new IS, adding “The new IS is a very comtemporarily styled car, and given it’s a hybrid the boot space is very good”. 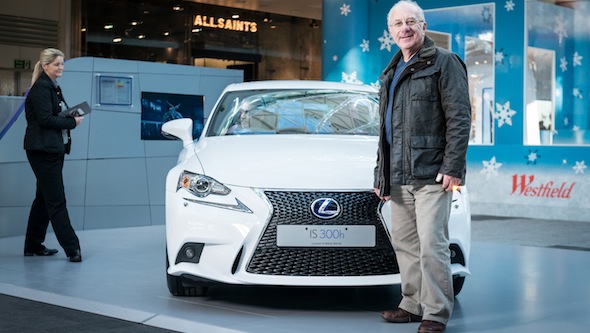 “Absolutely breathtaking,” were the words 67-year-old retiree Ray Batchelor used to describe the styling of the new IS. Ray observed that the model’s talents are more than just skin deep however, adding: “The MPG is very impressive, and the leather dash is really nice.” 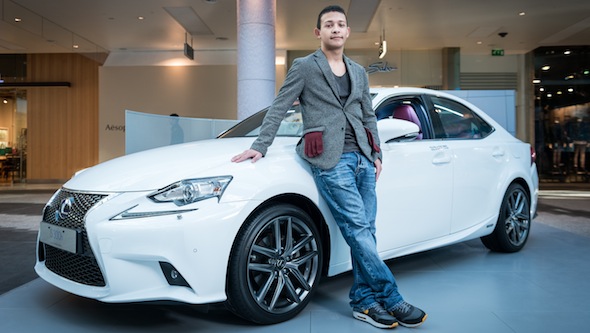 Stylish student Samon Nejod, 17, from Iran, was won over by the IS’ looks and its hybrid drivetrain, saying: “It’s nice, I like Lexus. The styling is futuristic. It’s very different, and the shape is nice. I like hybrids.” 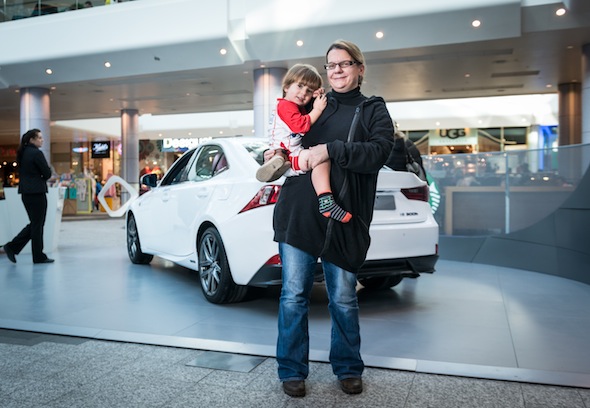 Lawyer Bryony Cove, 42, reminsced about Lexus, telling us: “My dad had one of the first IS in the late Nineties. This one is very luxurious, very modern. I would like to have a hybrid car – one of my neighbours has one.”

Here’s Bryony with her three-year-old son Joe, who seemed equally impressed with the IS – wasting no time in taking the driver’s seat! 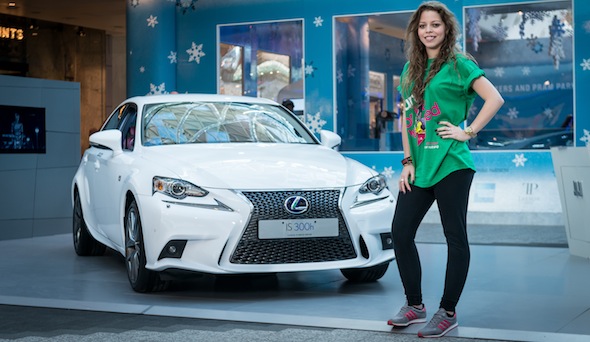 For retail assistant Daniella Mateus, 22, the IS evoked memories of a cult TV car, she said: “The IS looks great, I like the fact that you can make this a manual as well as an auto. It’s like the Knight Rider car, so futuristic.” 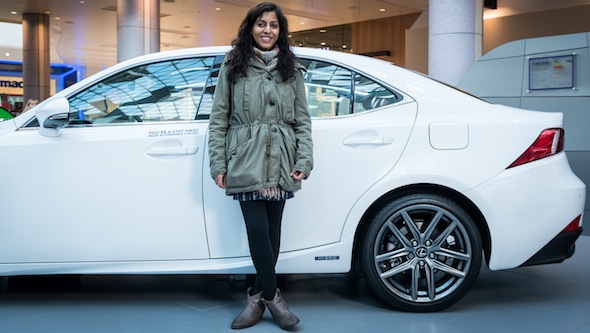 Journalist Iram Sarwan, 22, said: “It looks amazing. I like hybrids because they’re good for the environment. I like the front end, it gives the car personality.” 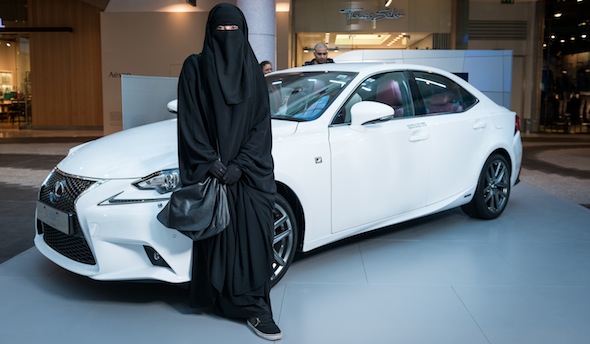 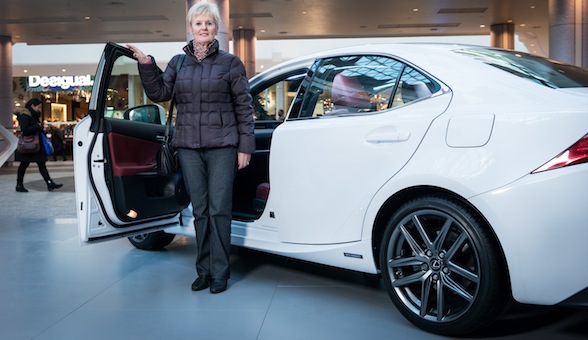 Ann Grinham, whose husband is a proud CT owner, said: “We have a CT and love it. My husband has had a few Lexus. The IS looks good and has nice lines.” 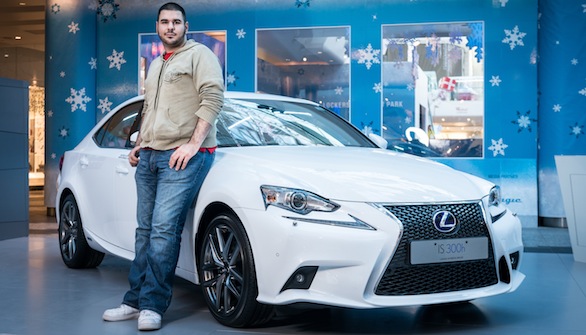 Technology technician Omid Lachnini, 26, owns a first-generation Toyota Auris Hybrid, which he described as “A life-changing car.” He added: “My car saves me money, that’s the cool thing about it.”

On the IS, Omid said: “The interior caresses you. Hybrids are the way forward.” 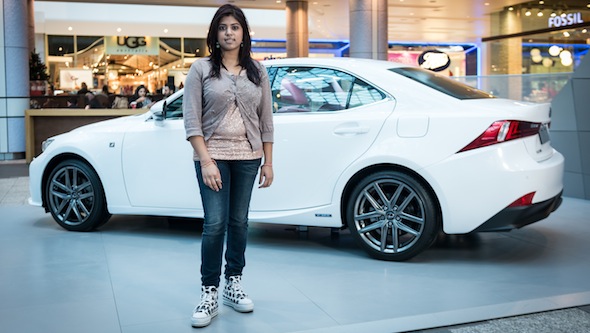 Mital Maugh, a 22-year-old customer service agent, said: “I like the look of the car the most. It’s a luxurious car. The seats are very comfortable.”

To find out more about the IS range, visit the model’s page on the Lexus UK website.

You can hear what shoppers at Newcastle’s Intu Metrocentre thought of the IS when it was displayed there in October, here.

Want to get behind the wheel of one? Leave a comment below expressing your interest and we’ll be in touch.