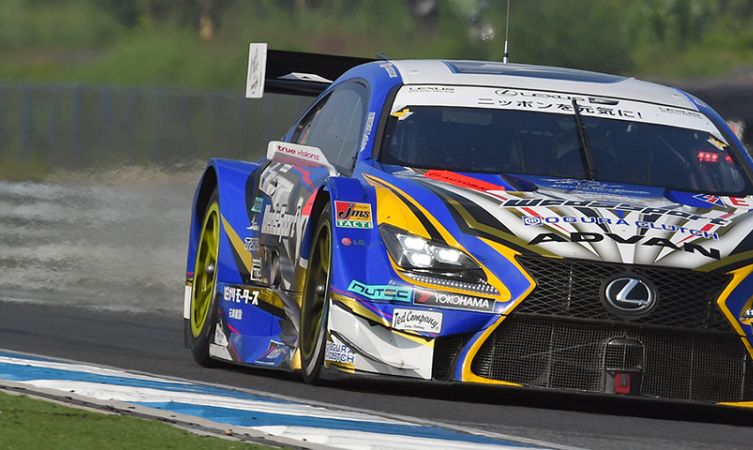 With only three races remaining in the 2016 Super GT series, round seven held at Chang International Circuit in Thailand was a hot one in more ways than one. Tropical heat meant exhaustion for both drivers and tyres, while for some competitors a good result in this race would decide the outcome of the entire championship. 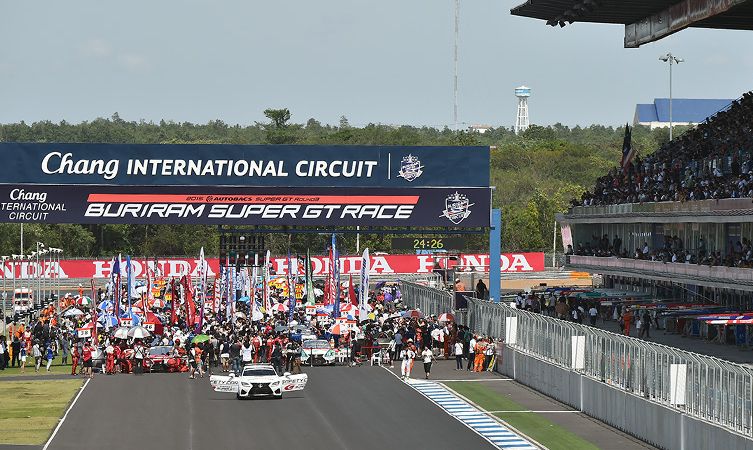 Super GT qualifying consists of two short track sessions, but only the fastest eight cars from the first session are allowed to compete for pole position in the second session.

Despite 30-degree air temperature and 38-degree track temperature, the opening qualifying round saw Kazuya Oshima set a new lap record in the #6 Lexus RC F run by team Wako’s 4CR. Two other teams running RC Fs also made it through to the second session. 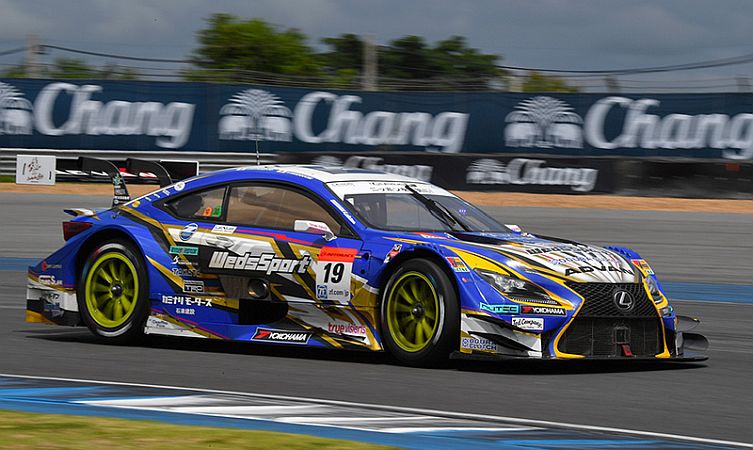 The gauntlet for the second round was set by the #12 car, just four thousandths slower than Oshima’s. However, after revising the car’s settings to account for cooling track temperatures, it was the pace of Yuhi Sekiguchi in the #19 Lexus RC F (above) that reclaimed the lap record and set a decisive pole position for the main event. Impressively, this was Sekiguchi’s (below left) first-ever pole in GT500 competition – an event the WedsSport Advan team was quick to celebrate. 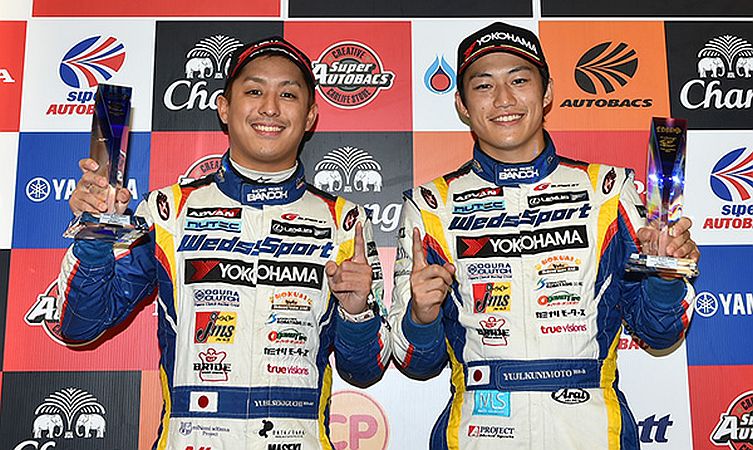 Almost 28,000 spectators arrived to support the main event in Thailand – the only overseas race in the Super GT calendar. Although taking place in October, temperatures for the 300km race were as hot as those in mid-summer in Japan. 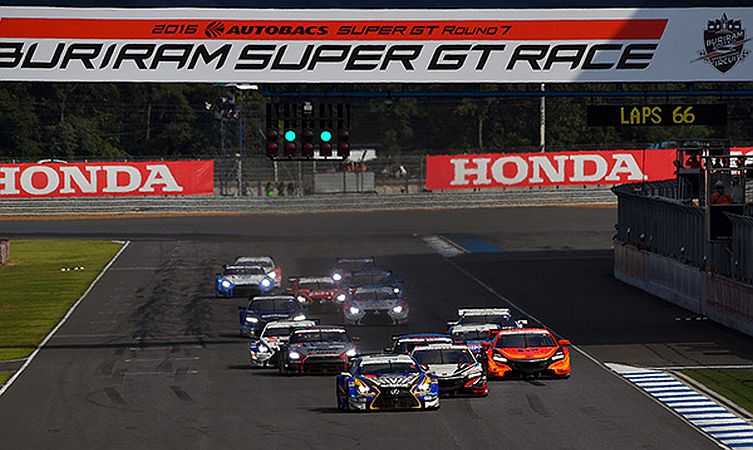 Making a fast start from pole position allowed Sekiguchi to pull away cleanly from the rest of the pack, increasing his lead by almost four seconds in the space of four laps. By the halfway point at lap 33, the #19 WedsSport Advan RC F was preparing to make its routine pit stop and driver change when the nearside rear tyre suddenly burst.

Split-second reactions from Sekiguchi allowed him to skilfully control the RC F and nurse it into the pits. A quick wheel change and switch to co-driver Yuji Kunimoto allowed the team to return to the race still in the lead and with no major damage to the vehicle.

Now with the knowledge that heat and tyre wear posed a major threat for the remainder of the race, Kunimoto carefully managed his pace and built on the lead of his team-mate to secure an impressive pole-to-pole win for WedsSport Advan. 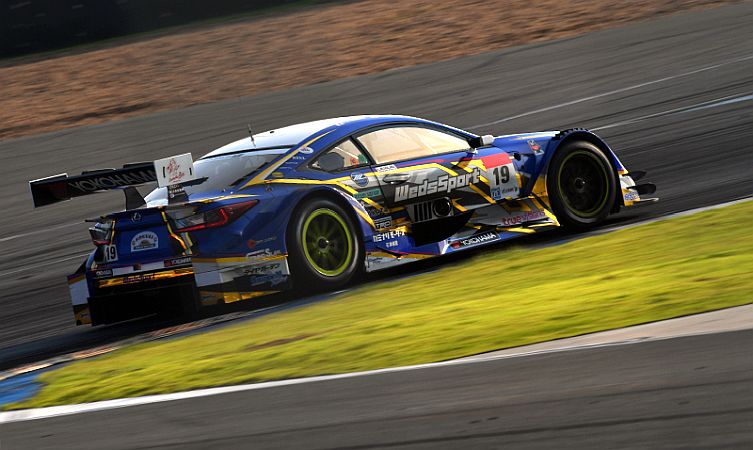 This result was the first GT500 win for both the team and Sekiguchi, and a second career win for Kunimoto. For the Lexus RC F, this marked the second win of the season and second in a row following the victory in the last round at Suzuka.

Adding to the celebrations, the WedsSport Advan team also won the ZF Award for the outstanding performance of its mechanics during the weekend. They were recognised for maintaining the Lexus RC F in top form throughout practice and qualifying, as well as for the perfect tyre selection and error-free pit work that contributed to the team’s first GT500 victory. 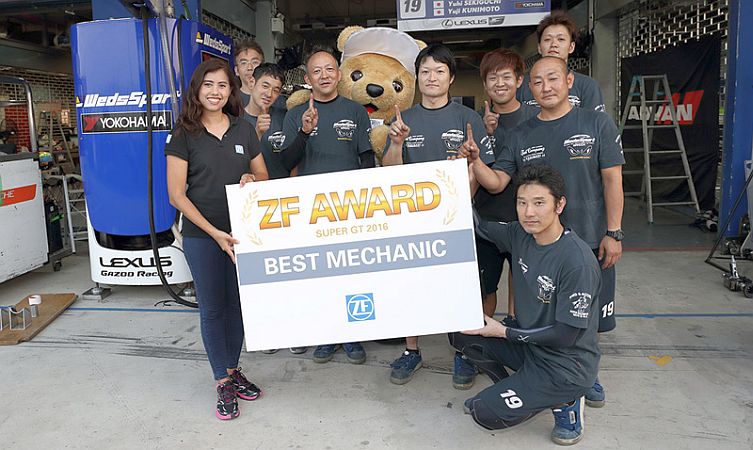 Summarising the race, Yuhi Sekiguchi commented: “By about the fifth lap after the start, I had pulled away from the car in second place and sure that I was running at the fastest pace. I had the burst tyre at the end of my stint, but since it happened on the second half of the course the loss was minimised. This is the first podium finish we have achieved since I teamed with [Yuji] Kunimoto, so it was great to get it.” 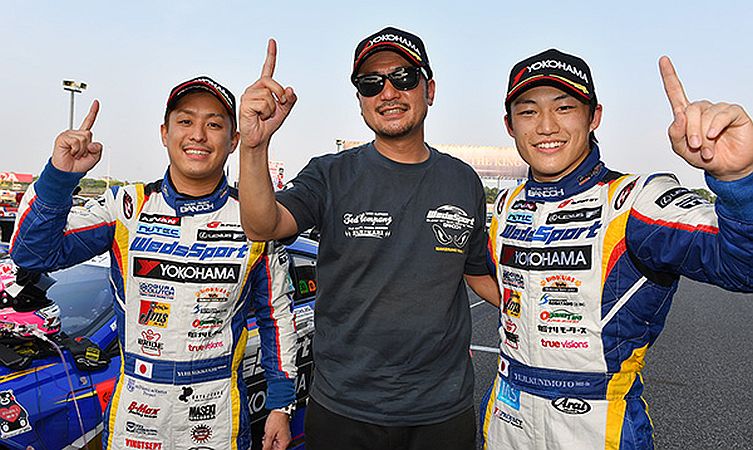 Adding his perspective to the outcome, Yuji Kunimoto (above right) said: “From the time we started running this race weekend the condition of the machine had been good and the changed we made in the settings brought good results. Today, [Yuhi] Sekiguchi got us a lead margin of about ten seconds, and when I got back on the track after the pit stop that lead had increased to 15 seconds. Then there was the penalty received the car in second place that further increased our lead.

“Still, I kept concentrating on tyre management. Although I used up all of my lead in doing that, I was able to help give the team its first win, so I am really happy with that.”

The final rounds of the 2016 Super GT series will be held at the Twin Ring Motegi circuit in Japan on the 11-13 November. Look out for our final report soon afterwards.