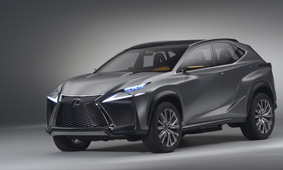 The new Lexus NX crossover will be unveiled at the Beijing Motor Show next month.

It was announced at the Geneva Motor Show that the new premium mid-sized crossover will be called NX. The car is derived from the LF-NX concept car that was first shown at the 2013 Frankfurt Motor Show.

‘Today I can confirm that Lexus will reveal this unique crossover in less than 50 days. The new car will be called the Lexus NX.

‘I can’t tell you how excited we are about this new car. The new NX will bring a significant boost to Lexus’ presence in Europe. It’s the right car in the right segment, and with a breathtaking design! ‘

The production-ready NX will sit below the RX in the Lexus model line up and will be given its world premier at the Beijing Motor Show on 20th April.