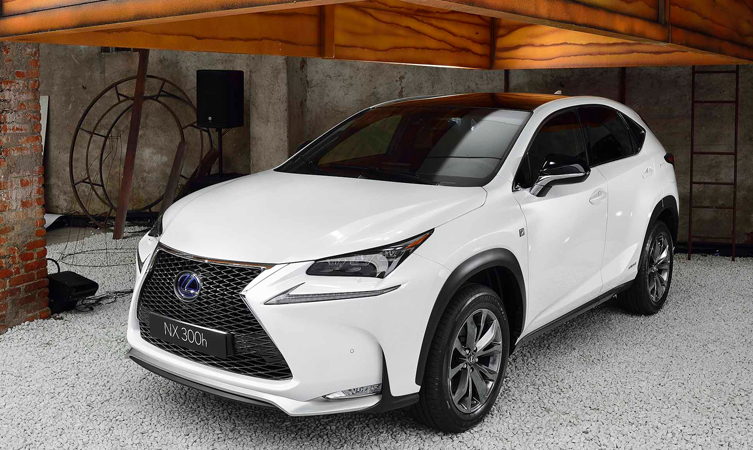 It’s been almost a year since the Lexus NX was unveiled to positive reaction from the world’s media. Now with the new NX 200t added to the range, alongside the NX 300h, the motoring press have once again been paying close attention.

The Sun’s Nick Francis was immediately grabbed by the looks of the NX, comparing them favourably to a main competitor.

“Look at it. I mean, really look at it,” he urged. “It’s got to be one of the best-looking SUVs on the market. I know some of you will pipe up with the words Range Rover Evoque but I think the NX has it beat on styling. Plus, you don’t have to be a footballer’s wife to drive one.”

Nick was no less effusive about the interior. “Inside is swish. You know you’re in a Japanese car when it’s loaded with tech such as a wifi hotspot (a godsend if you have iPad-addicted kids) and wireless charging for your phone. The computer is touchscreen and has a finger-tracking pad for that James Bond feel and the sat-nav is one of the best I’ve used.”

His conclusion on the new NX 200t? Very positive indeed. “All in all, Lexus have done themselves proud,” he said. “The hybrid NX is good, but this two-litre turbo is even better, and as a young(ish) person I would be proud to drive it — which, after all, is their aim.”

Which magazine noted the “distinctive looks” of the NX, and said: “whatever you think of the NX’s looks, it’s a high-quality car. Its interior is attractive, well-made and well-equipped. Desirable extras like that wireless phone charger and the earth-shaking 14-speaker Mark Levinson hi-fi also enhance the ‘premium car’ feel.”

The reviewer also noted the attractive pricing from Lexus. “It does look decent value alongside its rivals – especially when you take standard equipment into account.”

Motoring Research started its review with great praise: “The Lexus NX is a crisp, efficient crossover that could force the smash hit Range Rover Evoque to raise an eyebrow.”

Reviewer Shaun Carson marvelled at the refinement inside the NX 300h. “Cruising along the motorway at, er, motorway speeds, there’s barely any din from around the wing mirrors or door seals, and only an attenuated roar from the 18-inch wheels on our F-Sport spec test car. It’s ahead of the competition here. “

Carson’s conclusion was overwhelmingly positive. “This is the best Lexus hybrid yet – the firm has really nailed the integration of the powertrain. And although it’s not-so-fashionably late to bring its first mid-size crossover to market, the Japanese manufacturer’s initial attempt is a convincing one.

“The styling is recognisably Lexus and is helping carve out a company vernacular when it comes to vehicle design. Above all, it’s a well proportioned, posh but rugged looking off-roader. That its more efficient and better equipped than all of its rivals should be a big enough draw to tempt buyers out of Audi, BMW and Range Rover dealerships.”

At Autocar, the team was particularly struck by the Lexus Hybrid Drive powertrain found in the NX 300h.
“For all the neat design touches, what really stands out – in the 300h, at least – is the novel nature of the powertrain. It’s Lexus’s Hybrid Drive system – at once fiendishly clever yet brilliantly simple. Toyota and Lexus are rightly proud of the hybrid system that sits beneath the bonnet… It’s an incredibly compact system, and one that’s extraordinarily reliable.”

Driving in traffic, the reviewer said the NX 300h “tends to make even the most refined diesel rival seem gravelly and indelicate” and added: “At motorway cruising speeds it’s also quiet and comfortable, with no refinement issues – as you’d expect from a Lexus.”

Honest John was struck by the great craftsmanship, both inside and out.

“It’s incredibly refined, beautifully built and has a superb quality interior. It’s also spacious with good room in the back and a decent boot. And as with all Lexus models, standard equipment levels are very high with top models coming with pretty much every conceivable bell and whistle.”

The reviewer also praised the performance of the NX 300h, saying “thanks to 270Nm of torque from the electric motor, which is available from a standstill, the NX 300h pulls effortlessly and keenly away.”

For Mark Harris from The Sunday Times Driving, the pure petrol power of the NX 200t appealed. He said “among the towering fir trees of Seattle, where Lexus is launching the car, the 200t feels right at home, gripping the wide, winding roads with confidence and delivering a satisfying burst of pace when asked.”
He also enjoyed the NX 300h around town, and noted its myriad safety systems. “The 300h is most content in Lexus’s traditional suburban stomping grounds, purring sweetly in traffic jams, its electronics nagging you gently if you veer too close to other school-run parents.”

Auto Express was taken with the NX’s looks, as well as its specification. “Arguably the NX’s biggest selling point is its lavish equipment list and near-silent running gear. Around town it’s whisper quiet, and can even run on battery power alone for a couple of miles.”

The review team added: “Interior quality is impressive, with plush materials and soft-touch surfaces throughout.” About the NX 200t, editor Steve Fowler said: “Like the outside the NX interior looks great and is superbly made.”