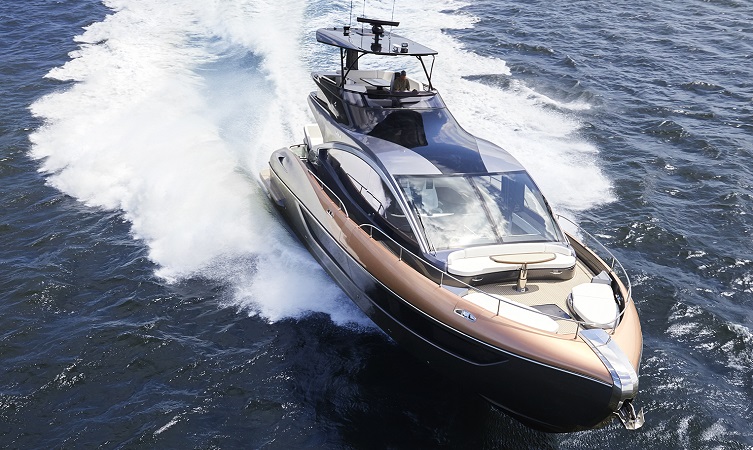 1. Why has Lexus launched a luxury yacht?

Although we introduced ourselves to the world as luxury carmaker, Lexus sees its future as a lifestyle brand offering unique experiences and products in a wide range of fields. So we didn’t see any reason why traditional Lexus qualities and attention to detail should be limited to terra firma. Presented today in Boca Raton, Florida, USA, the Lexus LY 650 is our first ocean-going yacht. It bears all the hallmark qualities of design, craftsmanship, advanced technology and performance that distinguish Lexus road vehicles, interpreted in the context of an exclusive and highly luxurious vessel.

Our new flagship follows the familiar alpha-numeric designation used in our vehicles, in that the two letters are used to describe the model while the three numbers offer an indication of size or power. In this case, LY 650 indicates that the vessel is a Luxury Yacht that sits in the 65-foot class.

3. Why did Lexus choose the 65-foot class for its debut yacht?

We felt that a vessel of this size offered the most appropriate balance. It is small enough to be owner-operated and therefore serve as a personal marine mobility solution, yet big enough to offer practical features and a luxurious living space.

4. How much horsepower is needed to propel such a yacht?

Vessels of this size usually require a power output of at least 1,500hp. As is common in this class, the Lexus LY 650 runs a pair of high-tech Volvo Penta marine turbo diesel engines with integrated propulsion systems and individually steerable pods. Three power options will be offered, with each straight-six engine tuned to deliver either 1,050, 1,200 or 1,350hp at around 2,300rpm.

The maximum speed of the Lexus LY 650 depends on weather and water conditions but is expected to exceed 30 knots (35mph).

It has three levels. The hull deck offers the most luxurious and spacious living and sleeping accommodation, while the upper cabin is at deck height and contains a kitchen, additional seating area and forward helm. But there is an additional, open-air helm suspended above the cabin – a feature that identifies the LY 650 as a flybridge cruiser.

7. Does the LY 650 share advanced materials or construction methods with Lexus vehicles?

Absolutely. One particular area of note is the widespread use of CFRP (carbon fibre reinforced plastic) – a composite material originally developed for LFA construction. Major structural components of the LY 650 apply infusion moulded CFRP for its strength and lightness both above and below the waterline – from the entire underwater hull to the hard top and bridge handrails. Compared to the FRP (fibreglass reinforced plastic) used in traditional marine structures, Lexus was able to reduce weight in these areas by approximately 30%.

Lexus production philosophies were also applied to the construction process in order to smooth areas such as workflow, machining and parts supply, while preventing production bottlenecks. Compared to vessels previously developed by build partner Marquis Yachts, construction time of the first yacht was reduced by 20%. Further improvements are expected to be implemented in full production.

When activated, virtual anchor is a technology that automatically maintains the vessel’s position and heading, even during strong currents or windy conditions. Used in place of a traditional anchor, it is a system that can be useful for leisure activities such as diving adventures, or when preparing for docking, refuelling, or the opening of a lock.

Are you sitting down? Depending on customer specification, the price is expected to be $3.7 million in the United States or £3 million in the UK. Sales commence on 30 October 2019 and will be conducted directly through Marquis Yachts (US) and Laguna Marina (Japan) and their respective distributors. It is expected that six LY 650 yachts will be produced per year.

10. Is Lexus new to boatbuilding?

Not entirely. Lexus’s parent company, Toyota Motor Corporation, established a dedicated marine department in 1990, which initiated the development and production of marine powerplants based on automotive diesel engines. In 1997, the business expanded to include boatbuilding. Since then the company’s multi-award-winning Ponam yacht line has included seven distinct models ranging from 26 to 45 feet in length, with a total of 900 units produced.

Lexus announced that it was exploring the possibility of boatbuilding in 2018 by unveiling the Lexus Sport Yacht Concept, which went on to win the Special Prize in Japan’s 2017 Boat of the Year awards.