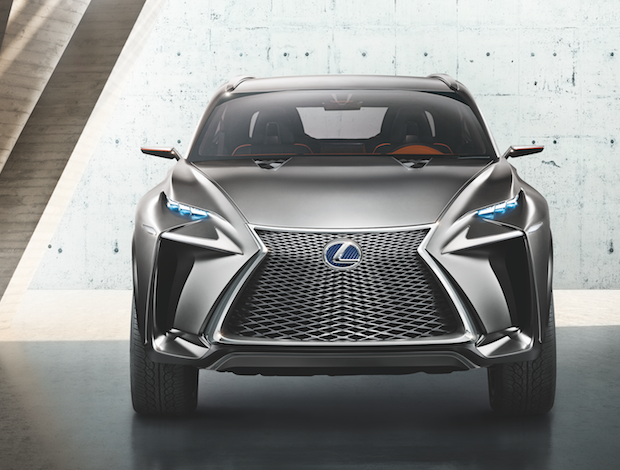 Ahead of its unveiling at the 2013 Frankfurt Show, we’re taking a look at the bold and brilliant design of the Lexus LF-NX crossover concept.

The model gives a glimpse of the bold styling and stand-out appearance that Lexus has in store for future models, while providing a clear statement of the L-Finesse design philosophy and from previous concepts like the LF-CC coupe and the LF-LC sportscar.

The LF-NX’s frontal appearance is dominated by a strong interpretation of Lexus’s spindle grille and a signature arrangement of the front lights. The daytime running lights are given added visual emphasis by being positioned independent from the headlamps, in a similar fashion to the new Lexus IS.

The LF-NX also displays a distinctive treatment of the front corners, which separate the bumper from the front wings with a sharp vertical cut line, similar to the lighting arrangement on the LF-LC.

Above the pronounced diamond shape of the belt line, the side glazing is arranged in the classic Lexus profile, which works with the steep rake of the tailgate to create an athletic coupe-like silhouette.

At the rear the highly articulated lamp clusters project down the full depth of the bumper, creating a sharp, aerodynamic trailing edge to the vehicle that mirrors the detailing of the front wing design, and harks back to the Lexus LFA supercar.

The concept is being presented in a new Brushed Metal Silver exterior finish that creates a striking impression of the car having been carved from a single piece of solid metal.

The interior mirrors the highly sculpted approach to the exterior with powerful forms and a highly ergonomic driver’s cockpit.