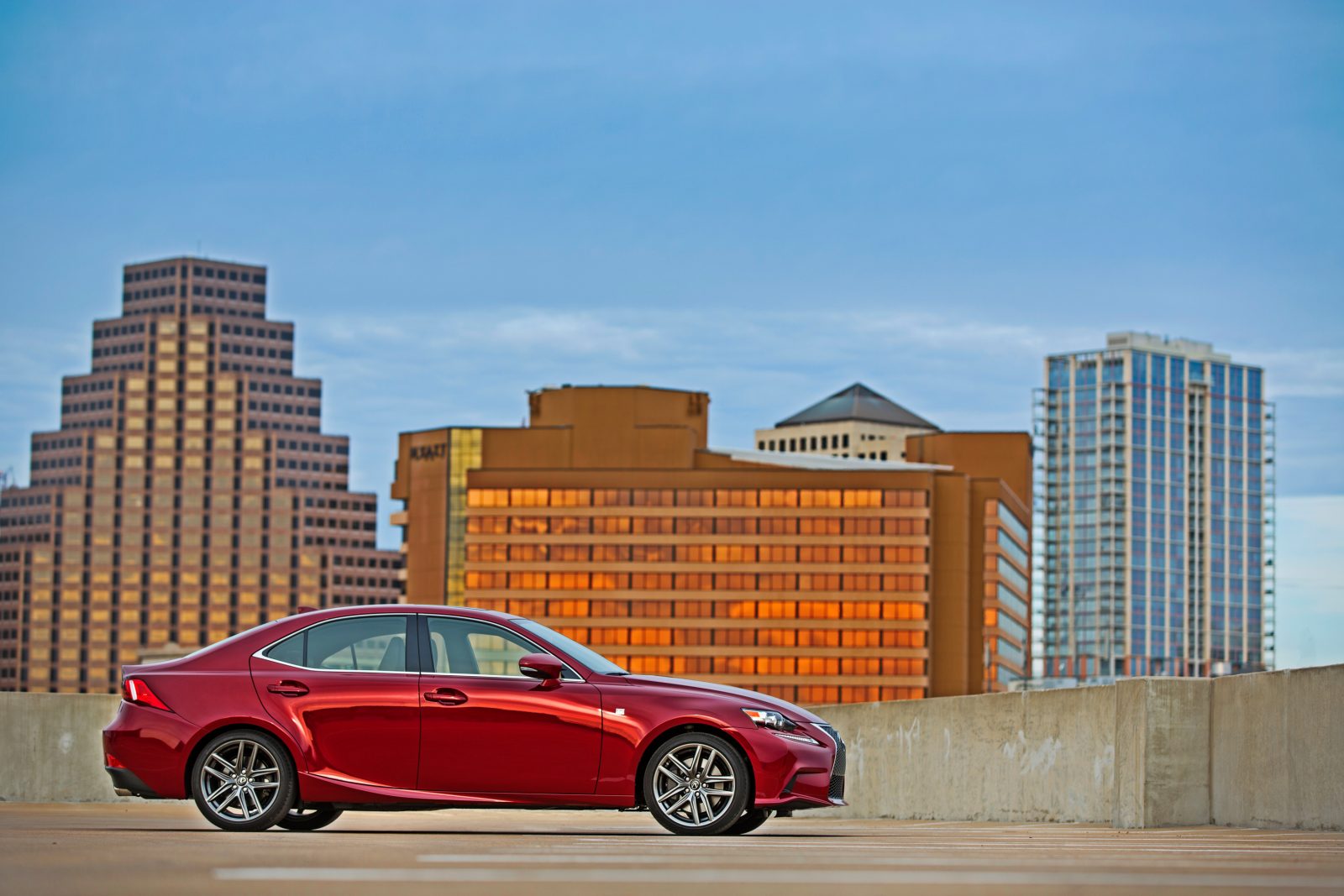 The Lexus IS is an athletic-looking compact executive with competitive running costs and a rewarding driving experience to boot. Here’s what the British motoring press has said about the model since its launch in July 2013.

“It’s satisfying to find the IS300h free of many of the compromises we’ve seen in hybrid saloons before. In entry-level SE trim, it’s hardly any more expensive than a mid-spec 2.0-litre diesel Audi A4. No longer must owners stomach an unpalatable premium for the privilege of occasional zero-emissions running. The performance stats are competitive, too. The boot is all-but as large and usable as any rival’s. And then come the numbers to really lure you in: 99g/km of CO2 and 65.7mpg on the combined cycle. The former stands to save a company car driver three figures on his annual tax bill, even compared with an equivalent BMW 320d Efficient Dynamics, via Benefit in Kind liability at just 11 per cent.

“The luxurious minutiae in here are the things that you really notice. The hefty, expensive feel of the switchgear, and the way the electric windows slow as they motor closed for a delicious softened thud. It seems the legendary plushness of the LS limousine may have finally filtered down to a mass-market price point in this car.”

“The styling alone should steal some sales from its more conservative competition. Boomerang LED running lights, the now-familiar spindle grille and tailights that taper to a fine point all look fantastic, but retain a definite Japanese flavour. Build quality is exceptional – there’s an extra 85mm of legroom over the previous IS in the back, too.“

“The large pinched grille at the front and brash front bumper that then sends flowing lines down the side of the body to the rear lights mean the new Lexus is a good-looking car that can’t fail to find fans.

“Where the Lexus excels is in providing great comfort from well set-up suspension that doesn’t crash over bumps or potholes and excellent, supportive seats. The interior adds to this high-class, relaxed atmosphere, with the quality of the materials and construction class-leading. Plus, there are some very neat features, including the touch-sensitive sliders to control the cabin temperature and the high-end Mark Levinson stereo.

“Given that the entire IS range comes with an automatic gearbox, the price – from £29,495 for the 300h – is attractive when placed against similarly specified rivals. Factor in the great fuel economy and the tax position, and if you’re not after the ultimate driving machine, then the Lexus IS300h is an intelligent choice.”

“With its adaptive dampers set to comfort mode, our F-sport IS rides at least as well as a similarly-equipped 3-series, and handles respectably too, with responsive, if not overly engaging steering, and minimal roll partly attributable to all those batteries stashed under the boot floor to the benefit of its centre of gravity.”

“(The cabin of of the Lexus IS is) beautifully screwed together – we’re confident that even 100,000 miles down the line, there won’t be a squeak or rattle to be found. The steering wheel looks great, and the rim isn’t too thick – as is often the case in some German rivals.

“Refinement is nigh-on class leading and, at motorway speeds, its hushed nature and excellent seats make the IS a fantastic long-distance cruiser.

“Costing £30,995, the IS 300h definitely has value for money on its side, especially when you consider how generous the equipment list looks. Our test car cost £31,605 – an extra £610 over standard for the Arctic White metallic paint, but every other goodie was equipped as standard.

“We started by asking if the IS 300h is a worthy rival for the 3 Series. Depending on where your priorities lie, the answer is yes, absolutely. It’s more refined, it’s great value for money, and as an ownership prospect, it could prove to be more frugal in the right conditions.

“Indeed, the IS can make a very strong case for being the most stress-free cruiser in this class.”

“[The IS] has scored a winner with the cabin design, which borrows heavily from the style of the LFA supercar and is a combination of pleasingly authentic retro and gorgeous high-quality finish. The seats are soft and welcoming, but supportive on longer corners. Accommodation is generous and a couple of six-footers will fit easily in the back, with a third at a push.

“The ride is really quite good. Even the F Sport, on 18in rims and tuned suspension, is comfortable in both of its adjustable damper settings. Other models have fixed dampers and there’s a bit of bounce over long waves, but body roll is well controlled and there’s a poise and purpose that feels quite sophisticated.

“The handling, too, is much the best that Lexus has ever offered. The steering is accurate, with good weighting and a reasonable amount of feedback. Even the single-piston swing caliper brakes are responsive and powerful.”

“Lexus is trying to reimagine itself. And with attractive, interesting looking new cars – such as the GS and LS saloons launched last year – it’s succeeding. Following those two vehicles is this, the 2013 IS. In the metal it does look attractive, indeed.

“In standard spec, the IS is a comfortable cruiser, with a well-judged suspension setup to iron out most imperfections in the road with little fuss. It makes a decent attempt at quicker cornering, too, thanks to a 10% stiffer body shell than before and firmer suspension that decreases roll by 25%.

“It feels upmarket still, and even the £26,495 entry-level SE model is endowed with an impressive list of standard-fit kit, including: 16-inch alloy wheels, cruise control, keyless entry and start, climate control, electric heated mirrors, a digital radio and Bluetooth.

“There’s plenty of room in the back and the 450-litre boot is on a par with the competition, all thanks to a 70mm increase in length, with 50mm of that total allocated to improving rear passenger space.

“Safety is strong, thanks to features such as blind spot monitoring and Lexus’ rear cross traffic alert system, which warns of approaching vehicles when reversing out of a parking space.”

“Indoors, you’ve got an unusual and rather fetching 3-dimensional dash shape. Since it’s a Lexus, the quality of materials is pretty fine and the list of equipment goes on and on. The F-sport version has vaguely similar reconfigurable clocks to the ones in the LFA, and most excellent sports seats too.

“That’s got the word sport twice into the same sentence. Which makes me sound like I’ve been taking deep draughts of their PR refreshment. They want us to think of the new IS as a sporty car.

“Well to an extent, it is. Especially in the F-sport version with slightly stiffened chassis: the steering is sharp and the handling slop-free. It has a happy hunger for bends and roundabouts, eventually melting into an appropriate mild understeer when you’re after the last drop.”

“Rear space was pretty limited in the old IS, but this new model has a longer wheelbase and slimmer front seatbacks. The result is you now get as much rear legroom as you do in a 3 Series – and more than in an Audi A4 or Mercedes C-Class.”

“Inside it is both spacious and scrumptious in equal measure. The seats are beautifully comfortable and the driving position is good. The dash is modern and everything feels solid and durable.

“It is light and nimble to manoeuvre and around corners it’s surprisingly sporty. At speed the IS 300h feels very assured, the steering is nicely weighted. Switch it to Sport mode and the suspension is firm but not harsh and overall it is very engaging to drive.”