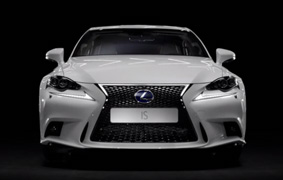 The new Lexus IS compact executive saloon is sponsoring drama on Channel 4 and to mark the tie-up, we’re taking a look at the boundary-pushing shows associated with the bold model. This week we take a look at New Worlds.

Why you should watch it

The English Civil Wars and the Restoration are eras of huge importance to British history, creating political changes that had an impact not only on ideas of democracy and civil rights in our country, but also, subsequently, in France and America.

However, unlike those countries, we tend to forget that we had a revolution in our country and don’t recognise that many of the freedoms we now enjoy are as a result of those tumultuous times.

This is the starting point for New Worlds, a four-part historical drama on Channel 4 from writers Martine Brant and Peter Flannery. Set in the 1680s, the action takes place on both sides of the Atlantic and follows four young people as they try to forge a fairer future – and fall in love.

In England, Charles II has restored the monarchy and is rolling back some of the hard-won freedoms established under Cromwell’s Commonwealth, the King’s wave of tyranny expressing itself in the form of show trials and summary executions.

Beth Fanshawe, the daughter of a Countess, leads a sheltered life until idealistic outlaw Abe Goffe shakes up her life and she embarks on a journey that will take her across the Atlantic to New England.

Meanwhile, in New England, the Puritan colonists, including young couple Hope Russell and Ned Hawkins, are not only attempting to throw off the control of the crown, but they’re also engaged in grabbing the land of the local native American tribes.

Although New Worlds is a work of fiction, the writers have cleverly interwoven real historical characters with those they have created, while also attempting to be as historically accurate as possible, using the actual words of the likes of notorious ‘hanging’ Judge Jeffreys and the King.

Brant and Flannery – the latter responsible for the highly acclaimed BBC drama Our Friends in the North – have devised a drama that addresses important historical and political events from an era that is usually overlooked in mainstream TV, also combining them with a love story that should broaden its audience.

As Martine Brant said: “New Worlds is the love story of four young people caught up in the timeless struggle of how to live a good life in an unjust world and how to make that world a fairer place. It’s about hope and idealism and the indomitable human spirit.”

The four-part story takes place over five years, crosses the Atlantic, tears the lovers apart and reunites them, while the events of a turbulent era surround them. New Worlds promises passion, political intrigue and plenty of lessons for the modern world, with its depiction of colonisation and how religious fervour can evolve into ruthless intolerance.

It should be gripping viewing.