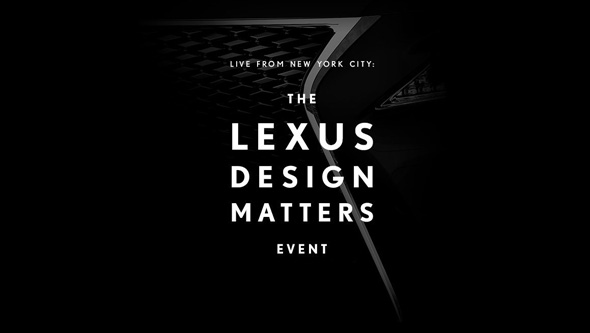 Lexus has reaffirmed its status as one of the world’s most design-focused car companies, revealing plans to showcase that philosophy across the globe.

We’ve already spoken with the man in charge of Lexus worldwide, Kiyotaka Ise, about the brand’s future plans. Read our exclusive interview here.

The ‘Design Matters’ event celebrated the brand’s ‘ongoing pursuit of innovation in technology, craftsmanship and design’.

The renewed approach to great design will be displayed with the launch of an annual design award, a short film series, a new brand magazine, as well as TV advertising and groundbreaking non-dealership retail spaces.

“This is part of the transformation of Lexus,” said Mark Templin, newly appointed executive vice president of Lexus International. “Lexus is expanding as a global company and we need to speak to a broad global audience. There’s no better way to do that than through design. Great design transcends cultures and doesn’t need any translation.”

Much of the focus on design for Lexus comes from the personal commitment of Akio Toyoda itself, grandson of the founder of Toyota. “I am very passionate about cars, and especially design,” said Toyoda. “To me, cars need to ignite all your senses, and one of the most important is the emotional connection you get when you see a beautiful car.”

This dedication to design is evident in concept vehicles from Lexus, such as the award-wining LF-LC hybrid 2+2 coupe concept and the LF-CC concept car.  It is also reflected in new production models such as the stunning all-new IS sports saloon.

Beyond its products, Lexus is now further supporting international design through a variety of unique initiatives around the globe:

As we’ve recently reported, the Lexus Design Award aims to inspire the next generation of designers, and give them the chance to have their creations displayed at the Milan Design Week. The first 12 winning works were displayed from April 9 to 14 at Milan Design Week, and two designers received the opportunity to create a prototype of their project with the help of two renowned designers, product designer Sam Hecht and architect Junya Ishigami.

Find out more about the Lexus Design Award here.

Intersect by Lexus and Crafted for Lexus

Neither a dealership, nor a traditional retail space, Intersect by Lexus will give people the chance to experience Lexus without getting behind a steering wheel. Opening in Aoyama, Tokyo this summer with locations in New York in Dubai to follow, Intersect by Lexus spaces will showcase the best in design, art, fashion, culture, movies, music and technology.

Within the space, Lexus will display exclusive retail items Crafted for Lexus. Lexus has commissioned Japanese artists to create unique pieces that are inspired by the brand’s philosophy: traditional craftsmanship with timeless beauty and innovative form and function.

A new lifestyle magazine, Beyond by Lexus, will feature news and features on Lexus cars, as well as stories on travel, architecture, art and design from a global and regional perspective. The magazine will be published around the world twice a year and translated into several languages. The magazine recently debuted and will be available on the global website from May 1st.

On May 1st, Lexus will launch a global advertising campaign with the theme ‘Amazing in Motion’, which features spectacular larger-than-life human puppet figures. High-technology 3D printing was combined with materials from Lexus cars including bamboo and walnut, and Lexus exterior paint, to construct the figures. The smooth skills of a team of puppeteers bring the figures to life on a grand scale.

Lexus is to support emerging directors from around the globe, commissioning them to bring five wonderful stories to life as short films. The stories are beautifully told and explore the theme that ‘Life is Amazing’. They will debut at various film events around the world and will be released online later this year. Lexus and The Weinstein Company will hold the world premiere event at the 2013 Festival de Cannes in May.

More information about Lexus’ design initiatives can be found at the Lexus global website.