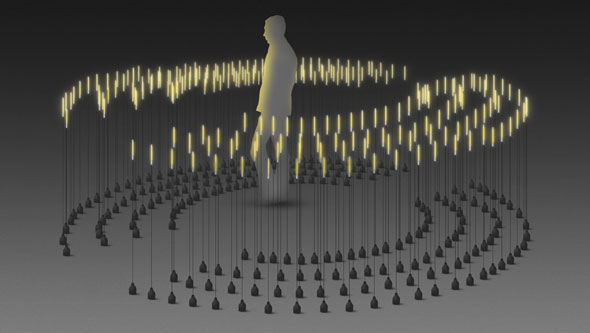 An interactive lighting system inspired by rice and porcelain bowls made from paper moulds are set to debut at Milan Design Week after taking the top prizes in the Lexus Design Award.

Twelve designers from nations including Spain, Iran, Taiwan, Jordan and Korea were among the winners, but the concepts created by Japan’s Hitomi Iragashi and the Tangent studio of Hideki Yoshimoto and Yoshinaka Ono have been given top billing. Both will be shown in prototype form at the festival in April.

The prize includes mentorship from the head judges, product designer Sam Hecht and architect Junya Ishigami. They personally selected the two leading designs based on uniqueness, originality, relevance to the competition’s ‘Motion’ theme and the realistic possibility of making a prototype.

Find out more about Sam Hecht and Junya Ishigami.

Iragashi’s ‘Making Porcelain with Origami’ draws on the heritage of the famous Japanese paper folding technique to create moulds in which decorative porcelain pieces are cast. Iragashi will be mentored by Junya Ishigami.

The ‘Inaho’ lighting concept features a ringed layout of interactive freestanding lamps, with bulbs shaped like an ear of rice. Tangent will be mentored by Sam Hecht.

Even in its first year, the Lexus Design Award received a total of 1,243 entries and due to the high quality level of submissions, 12 works have been recognised in total, instead of 10 as initially planned.

Here’s the shortlist (in alphabetical order of project title):

Milan Design Week runs from April 10th to 14th – find out more about it here.

The award ceremony will be held on Tuesday, April 9th at 7pm at Museo della Permanente where each winner will receive from Lexus International the first-ever Lexus Design Award trophy.