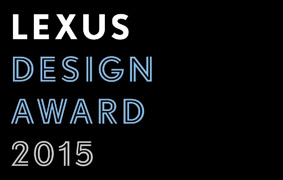 ENTRIES ARE NO LONGER BEING ACCEPTED

The third Lexus Design Award is open for entries from today. Launched in 2013, the international competition aims to foster the talents of young creators for problem-solving design.

In its first two years it has gained worldwide attention for its mentoring programme, by which the top entrants are given guidance by world-renowned experts to turn their innovative ideas into working prototypes. Last year British designer James Fox was one of the competition’s two winning designers, rewarded for his children’s construction kit concept, Macian.

The theme for the 2015 award is Senses, offering participants a broad range possibilities embracing seeing, hearing, feeling, smelling and tasting. This reflects Lexus’s focus on the driving experience being about sensations, from the appearance of a vehicle’s styling and the sound of its engine, to the feel of its interior.

The competition will produce 12 finalists whose work will receive wide exposure within the design community and beyond. The finalists will be announced in early 2015 and their work will be exhibited at Milan Design Week in the spring.

This year, four of the finalists (twice as many as last year) will enjoy the support of international design mentors in developing their prototypes. Taking part will be architect and engineer Arthur Huang; game designer Robin Hunicke; architects and interdisciplinary designers Neri & Hu; and designer Max Lamb.

The mentors will lead development sessions for production of the prototypes between January and March. The award will provide up to 2.5 million yen (about £14,500) for each project.

Entries are being accepted now, via the designboom website at www.designboom.com/competition/lexus-design-award-2015.