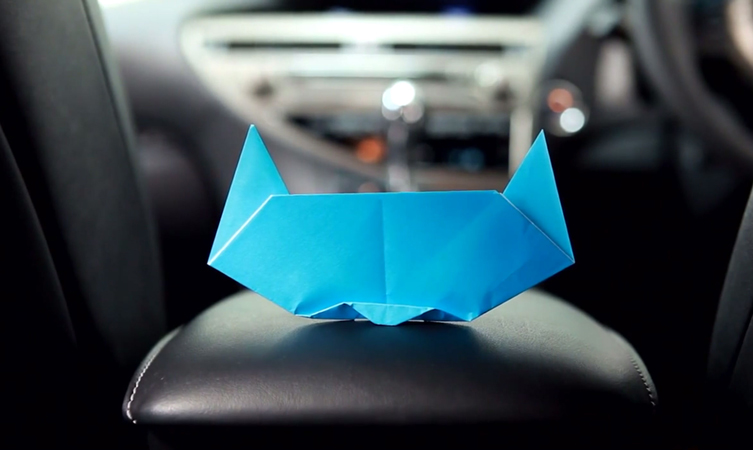 The people that work at Lexus’ factories aren’t just employees. They’re craftsmen and women that take considerable pride in the standard of their work.

But not all Lexus craftsmen are equal. At the top of the tree are artisans known as ‘takumi’. Their goal is simple – the pursuit of perfection in their chosen field, whether it be paintwork or welding, vehicle dynamics or interior crafting. They are responsible for keeping up the high standards Lexus demands of its vehicles.

Becoming a takumi is no easy task. All takumi have at least a quarter of a century of experience, time spent honing their skills to a fine point. Several takumi have had their skills digitised and programmed into robots that recreate actions repeated thousands of times, so it’s vital that they’re up to scratch.

Before becoming a takumi, candidates are assessed in a number of ways, but one is via a decidedly non-digital method – the Japanese art of paper folding, origami. Before they graduate to takumi status, candidates are challenged to fold a relatively simple origami cat.

But here’s the catch – they have to fold the cat with just one hand, and in under 90 seconds. Oh, and it has to be their non-dominant hand.

Try the Lexus origami challenge yourself! We’ll show you how

Challenging? To find out, we went to see Mark Bolitho. A respected name in the world of origami, Mark works full time creating paper masterworks for corporate clients, advertising and events, and is also the author of several books on the art. In short, he knows what he’s doing when it comes to folding paper.

We asked Mark to try the takumi challenge to see just how much skill and dexterity it required. Before we turned up to film the video you see here, we’d given Mark advance notice, so he’d spent a bit of time practicing. His discovery was that it’s not as easy as you might think…

Normally Mark would fold his paper with both hands against a flat surface, so trying to manipulate the sheet with only his left fingers proved problematic. But he’s a pro, so as the cameras rolled and the stopwatch started, he proceeded to deftly weave the paper into the Lexus cat design. It looked good, but there was a problem – he was outside of the 90 second time limit.

He tried again, but it took several attempts before he finally managed to complete the challenge within the time limit, much to his delight.

The required dexterity and concentration then is obvious – if an acknowledged origami expert finds it a considerable challenge, then it’s surely a worthy benchmark for prospective takumi.

Now Mark, all you need to do is spend 25 years working at a Lexus plant, and perhaps you too can qualify as a Lexus master craftsman.