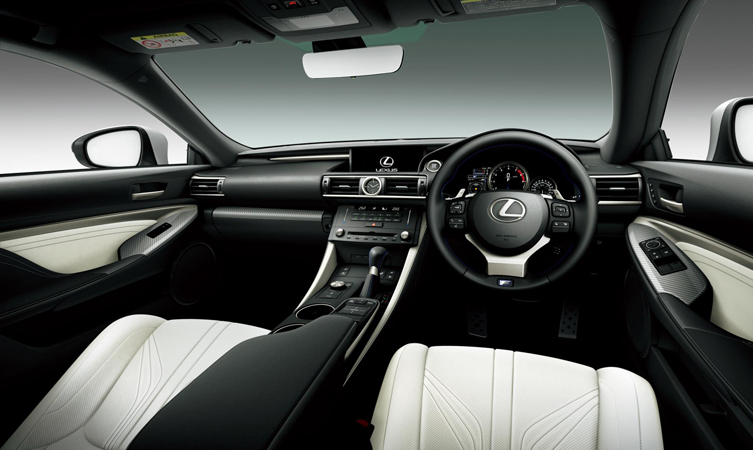 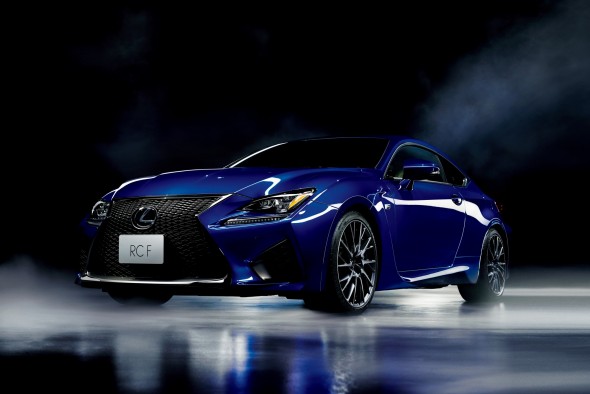 Lexus International has provided a crop of new Lexus RC F images that highlight many previously unseen elements of the exotic sports car. The photos also represent the first time that the 5.0-litre, 471 bhp V8 road-going RC F – which goes on in January priced at £59,995 OTR – has been lined up beside its motorsport equivalent, the RC F GT3. 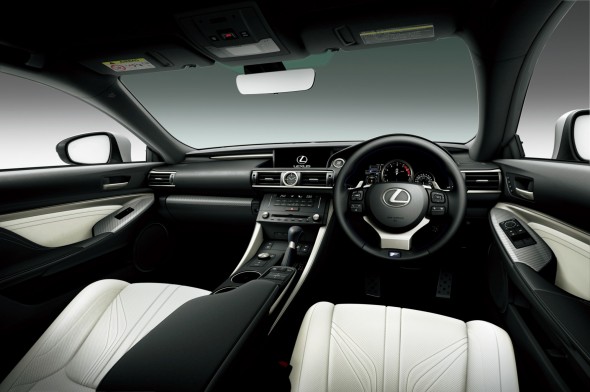 This image shows the interior of RC F in production right-hand drive form for the first time. A thick-rimmed, three-spoke steering wheel is backed by digital dials that shift across screen when Slalom and Track modes are selected, doing so also alters the colour of the instrumentation.

The two-zone dash display features the latest iteration of Lexus’ Remote Touch Interface in the lower operation zone. Carbon fibre effect inlays feature on the doors, while the grab handles and air vents have a chrome finish. 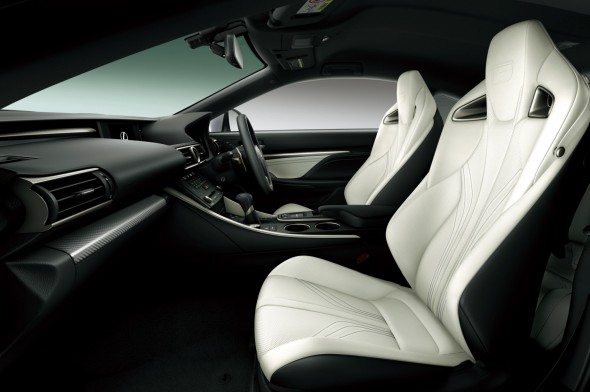 The heavily bolstered and high-back seats are wrapped in two-tone white and black leather with contrast stitching. The seats are available in a choice of five leather trims, while the RC F Carbon has a sportier feel from its Alcantara-clad seats. The seats are heated and ventilated (heated only on RC F Carbon) and feature eight-way power adjustment. 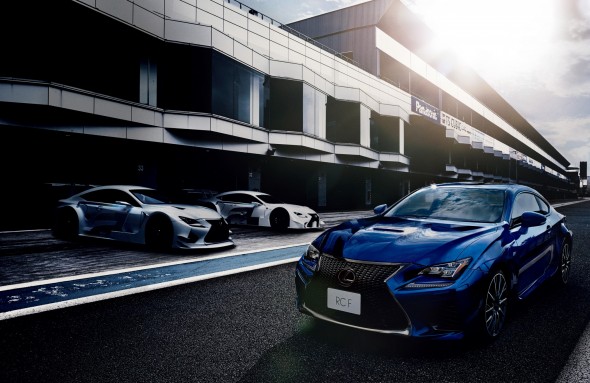 This moody image sees RC F on track with its race car sibling for the first time. The RC F in the foreground is presented in new Heat Blue; the deep lacquered paint finish with contrast layering is evocative of a pale blue flame. The luminosity of the RC F’s blue coachwork is in sharp contrast to the white finish of the RC F GT3 models by which it is flanked in the pit lane. 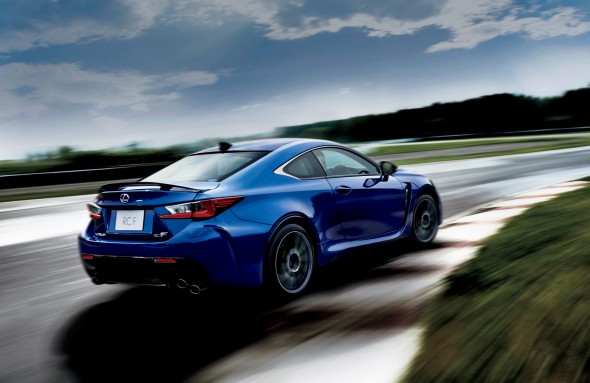 Lexus International has already entered a race car based on the RC F into the GT500 class of Japan’s Super GT series. In April 2014, Lexus secured a one-two finish at the Okayama International Circuit in Japan with the #37 KeePer TOM’S RC F driven by Daisuke Ito and Andrea Caldarelli; the #6 Eneos Sustina RC F was driven by Kazuya Oshima and Yuji Kunimoto.

RC F GT3 cars are being supplied to teams around the world for entry into races such as the Nürburgring VLN endurance series. 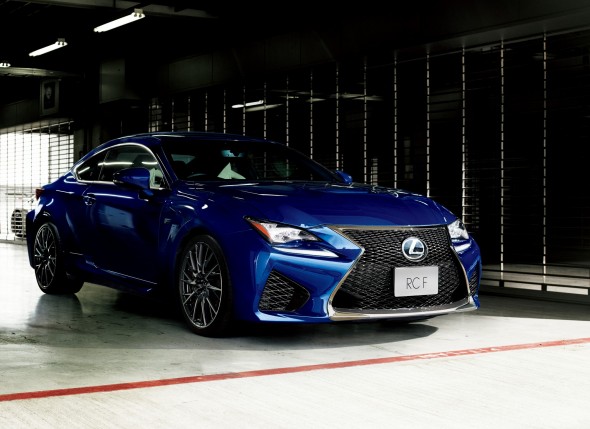 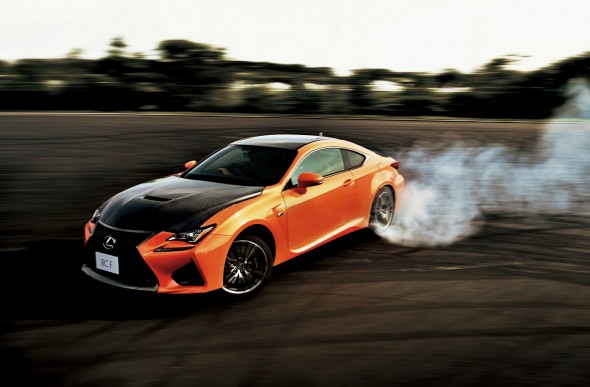 Earlier this year, we asked you to help us name the RC F’s eye-popping new orange hue on Facebook, and our director, Richard Balshaw, chose ‘Solar Flare’ as the final name from the 400+ entries that we received. The above photo is the first time that we’ve seen the colour applied to RC F Carbon – the even more focused version of RC F. 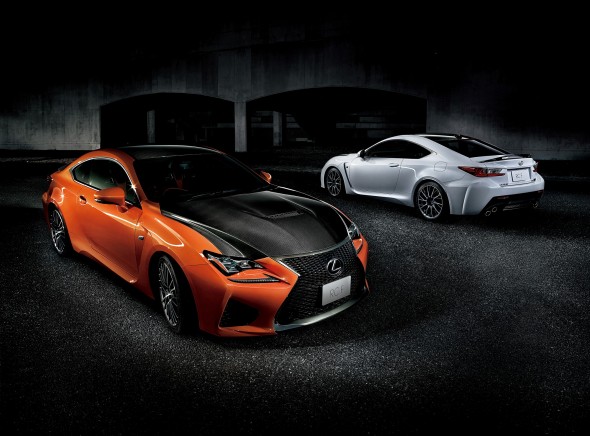 The RC F Carbon gets a performance upgrade in in the form of a torque-vectoring differential and a CFRP (carbon fibre-reinforced plastic) roof, bonnet and rear spoiler. Cosmetic tweaks include dedicated 19-inch forged alloy wheel design and Alcantara upholstery. 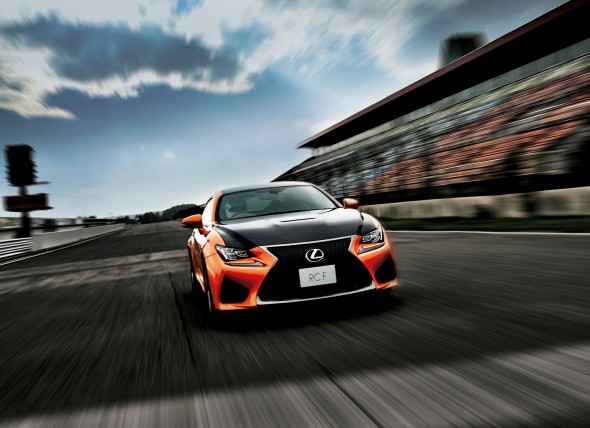 The model comes with a premium Mark Levinson Surround Sound system as standard and will go on sale at the same time as RC F, priced at £67,995.

Lexus RC F UK prices and specs
Lexus RC F GT3: The racecar the world has been waiting for

Register your interest in RC F on the designated section of the Lexus UK website.