Skip to content
Home Brand Stories Design Behind the scenes of Strobe: how the lightmen held their pose 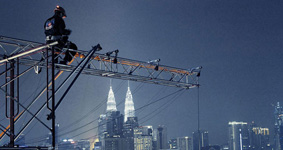 Lexus Strobe is a project that set out to show one man running a seemingly impossible journey across a city skyline.

To do so, Lexus had to assemble a team of hundreds of experts in design, technology and engineering to bring it to life.

One main challenge was to find a way of suspending the ‘Lightmen’ as they held a pose in a sequence all over Kuala Lumpur.

Lexus joined forces with a 40-strong team of expert engineers from Thailand, masters in developing large-scale rigs capable of such ambitious feats.

Lexus is forever pushing the boundaries of engineering and Strobe took the same approach. Everything needed to be meticulously planned and worked out in rehearsals first.

Although the lightmen were all professional stuntmen, acrobats and martial art experts, the extreme heat conditions offered a constant challenge for them.

Every rig needed to be designed so that each lightman could be moved in and out of position quickly and safely, while every pose had to be exact and held perfectly.

And every rigger needed to know their job inside out, so that when the event went live everything came together to achieve the illusion of motion – whether they were in the street, in the tree tops or dangling off some of the highest rooftops in Kuala Lumpur.

Lexus Strobe is the third in a series of Lexus films designed to show what ‘Amazing in Motion’ means. It follows on from Steps and Swarm films.

Where next?
Behind the scenes of Strobe: engineering the light suits
Watch Swarm