Skip to content
Home Brand Stories Design Behind the scenes of Strobe: engineering the light suits 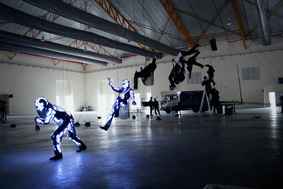 Strobe is the third in a series of short Lexus films that aims to show what ‘Amazing in Motion’ means. Following on from Steps and Swarm, Strobe shows a group of performers dressed in LED light suits soar above the streets of Kuala Lumpur.

With the Lexus philosophy having a deep rooted history in design and craftsmanship, Strobe set out to bring these principles to life through a visually stunning spectacle of a lightman running across a city skyline.

As award-winning director Adam Berg explained: “This was a project about recreating movement without gravity, hindrances or boundaries.”

With this in mind the development of the light suits was paramount to the entire project. We teamed up with Hollywood costume designer Vin Burnham, whose vision was to create a suit that was both visually stunning and allowed incredible movement.

Hundreds of designs were imagined, drawn up and mocked up. The hand-stitched final designs took inspiration from the Lexus Spindle Grille, and needed seven layers to perfect: a base layer; a LED skin; four further layers to disperse the light evenly; and an outer silk layer to add definition.

Once we had the final designs we teamed up with Adam Wright, a world-renowned technical director, to develop a bespoke wireless computer system to light the suits.

Inspired by the advanced computer system in other Lexus vehicles we could control and monitor each suit individually allowing them to light up in perfect sequence, even in mid-air.

The end results was a high-tech suit that not only gave the Lightmen all the support and flexibility they needed, but also brought Amazing in Motion to life through a striking visual display.

Where next?
Behind the scenes of Strobe: how the lightmen held their pose
Watch Swarm