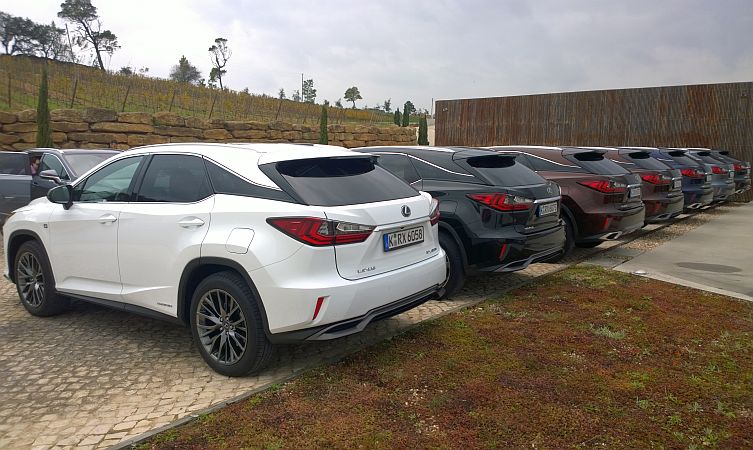 The arrival of the new fourth-generation Lexus RX is a significant event for Lexus. In preparation for the first customer deliveries in January, we invited 23 selected UK motoring journalists to give their first impressions of the turbocharged RX 200t and full hybrid RX 450h on the European dynamic press launch in Lisbon, Portugal.

The variety of models, colours and specifications available to test-drive for this event were flown in specially for the occasion.

Why is the Lexus RX so important?

The answer to that question was revealed during the press conference, held soon after arrival and before the keys to the cars were handed over.

Ushered through a corridor of striking angles lined with fabric skins over moveable frames, we entered a large room filled with a battery of egg-like pod chairs. Informative presentations were given by Lexus representatives such as Naohisa Hatta (below left), assistant chief engineer of the new Lexus RX, and Richard Balshaw (below right), director of Lexus UK. Later these same representatives fielded a series of questions from the inquiring audience.

According to calculations, 30 per cent of all Lexus vehicles sold since the launch of the brand has been an RX model.

Lexus engineers have worked hard to ensure the new RX will maintain its status as the most successful Lexus model. Development focused on four key objectives: 1) Bold design, 2) Luxury feeling and features, 3) Intelligent innovation, and 4) Enhanced driving dynamics. Some of these elements were visualised in a display model, where the complex construction and inner workings of the car were exposed.

After the conference it was time for everybody to get behind the wheel and judge the car for themselves. With careful management of the bookings it was possible for every journalist to have the opportunity to spend quality time with both RX 450h and RX 200t models.

Challenging routes with handy stop-over points and photo opportunities had already been programmed into the navigation systems of the cars, although the journalists were free to choose their own test routes if necessary. Most, however, followed the suggestions so they could concentrate on driving rather than navigating through unfamiliar territory.

Each stop-off had been carefully chosen to capture the essence of Lexus beyond the confines of the automotive world – a theme also found in the Lexus Recommends series.

Lunch had been arranged at the beautiful AdegaMãe winery on the outskirts of Lisbon. Located on clay-limestone soil influenced by the Atlantic climate, this highly acclaimed wine producer is regarded as a cellar of the future. It is equipped with cutting-edge resources for optimised production yet shows utmost respect for the tradition and nobility of wine.

Although no wine was served at lunch, it was pointed out that we would have the opportunity to sample AdegaMãe wines during dinner that evening.

A final, short coffee stop had been arranged at the architecturally significant old granary restaurant of Quinta do Gradil, one of Portugal’s oldest recorded estates and host of 120 vineyards.

But with darkness descending and rush hour approaching, everybody was keen to keep moving. So with the final leg programmed into the navigation system and the subtle ambient lighting making the interior of the new Lexus RX even more inviting, we all made our way back to the hotel for the evening.

Located on the edge of the Tejo river and with spectacular views over Parque das Nações, the sail-like design of the multi-award-winning Myriad hotel by Sana makes it one of the most distinctive buildings in Lisbon. Similar things, of course, could be said about the design of the Lexus RX among its competitors in the luxury crossover segment.

As our group gathered before dinner, the opportunity was opened to re-experience the new RX in immersive virtual reality by using Oculus Rift.

It had been a fantastic launch event, but we had taken up just one day in a packed, multi-week itinerary that would continue until journalists from all European markets had been included.

What did the UK motoring journalists think of the new 2016 Lexus RX?

Search for #LexusRX and #LexusRXLisbon on social media to discover what they said during the course of the day. Alternatively, look out for our review of their comments in a special blog post we will publish early next week.

Learn more: Price and specifications of the new 2016 Lexus RX